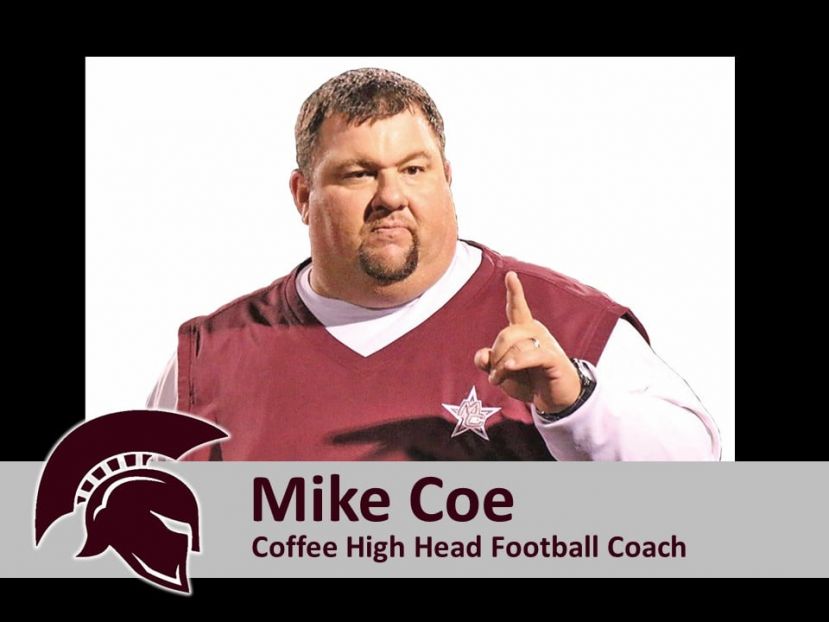 Mike Coe, former head coach of the Madison County (Florida) High Cowboys, has been named head football coach at Coffee High School. Coach Coe will bring a wealth of experience and success into the Coffee High program, having established himself as one of the most successful and respected football coaches in the state of Florida.

His coaching career spans nearly three decades, beginning in the spring of 1994, his senior year at Auburndale High School in central Florida. He was selected 1st Team All-State playing center and voted team captain during his 1993 senior season. He coached at Auburndale from 1994 until 2003, when he joined the coaching staff at Madison County High School as an assistant coach. He became head coach at Madison County in 2010, and has established a career record of 136-27 over twelve seasons. He has won a total of five state championships in nine state final appearances with Madison. One of those state championships (2007) was as offensive coordinator, and four (2017, 2018, 2019, 2021) were as head coach of the Cowboys.

Coach Coe was inducted into the Florida Athletic Coaches’ Association Hall of Fame in 2020, was named Dairy Farmers of Florida Coach of the Year five times in three different classifications, and named Coach of the Year twice by the Tallahassee Democrat. Coach Coe has been selected to speak at over 25 football clinics during his career, including Nike Coach of the Year, Glazier, FSU, FCA and SE Wing-T. As Athletic Director at Madison, he was a three-time winner of the FHSAA’s Floyd E. Lay Sunshine Cup Award for the state’s top athletic program. As Head Weightlifting Coach, Madison won the 2017 State Weightlifting Title. One of Coach Coe’s proudest accomplishments is a graduation rate of over 97% among all athletes that have come through his athletic programs.

Coach Coe and his wife of 21 years, Amanda, have four children – Zac, 20; Brayden, 15; Alexa, 10; and Madison, 3. Amanda has taught at the elementary level for 12 years. He and his family have been members of Hopewell Baptist Church in Madison since 2005.