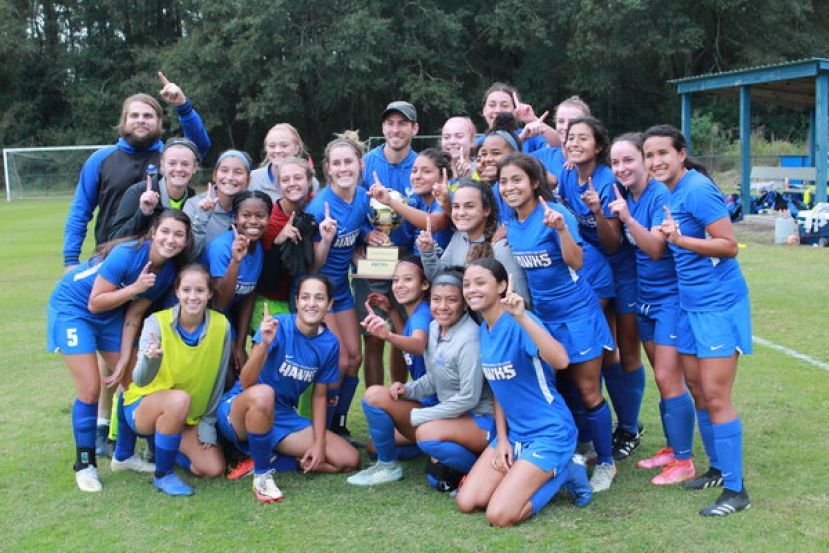 The journey for the championship began on August 8 when they began their play during fall semester.  After finishing the regular season 10-1-1, the Lady Hawks secured their second consecutive regular season championship and the #1 overall seed in the conference tournament.

For the semifinal match, SGSC hosted Abraham Baldwin Agricultural College on October 27, 2021.  The Hawks easily defeated ABAC 7-0 securing their place in the championship match.  For the final, the Lady Hawks hosted Gordon State College.  This was a familiar foe, who defeated the Hawks in the 2020 championship (just 6 months prior).  This season SGSC tied Gordon 0-0 and defeated them 1-0, both games going into overtime.

The final game was no different, after 110 minutes of play the score was tied 0-0.  To decide a winner, there was a penalty kick shootout, placing the top five kick-takers from each team against each other.  The first round of penalties saw SGSC's Devani Rodriguez and Gordon's Gabriela Arellano both score.  Next, both players in the second round missed, keeping the score at 1-1.  During the third round, SGSC's Lissette Sanchez scored to make it 2-1 followed by a miss from Gordon State.  Madison Steyer stepped up in round four and scored making it 3-1 in favor of SGSC.  Gordon then needed to score to continue the game, but the shot went off the crossbar and gave the Lady Hawks the win and the championship.

During this incredible season, the team accumulated a multitude of awards including GCAA Player of the Year - Lissette Sanchez and GCAA Coach of the Year - Jacob Crawford. Six First Team All-Conference selections were presented to Aubrey Harrison (So.), Isabella Bertossi (So.), Martina Garrido (So.), Alex Reyes (So.), Maelah Giddens (So.) and Lissette Sanchez (So.). The Lady Hawks earned three Second Team All-Conference elsections including Makayla Robinson (Fr.), Devani Rodriguez (So.) and Madison Steyer (Fr.).

The Lady Hawks received numerous awards last season, which was played in the spring due to COVID. Jacob Crawford earned GCAA Coach of the Year along with seven All-Conference selections and the NJCAA Academic All-American Team.

Currently, the Lady Hawks are 12-1-1 and will host the Southeast District Championship for an automatic bid to the national tournament.  This game will be played on Thursday, November 4, 2021 at 2:00 pm on the Douglas campus.