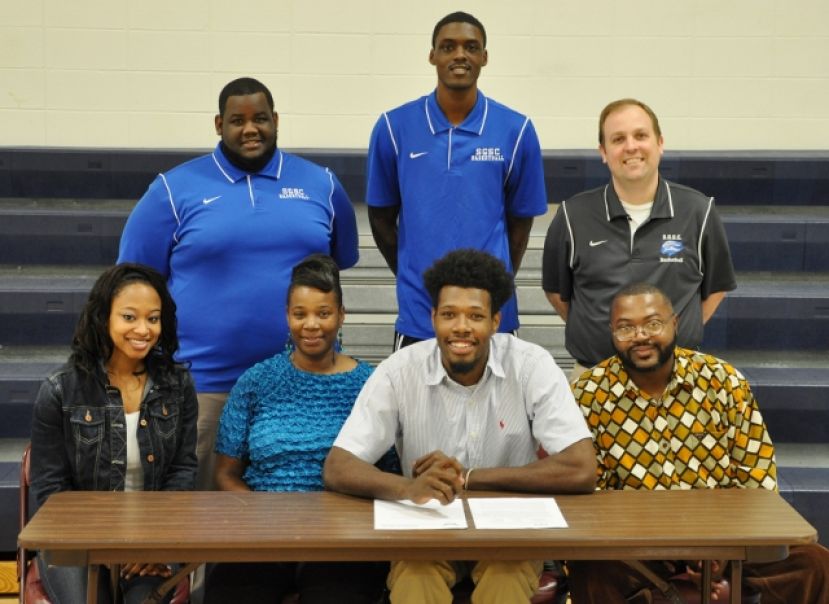 South Georgia State College's Demontrez Austin is a good example of reaping the benefits of hard work.  He has been named the Georgia Collegiate Athletic Association's Player of the Week for the week of Nov. 17-24 and has signed a letter of intent to continue his basketball career at Kennesaw State University (KSU).

A 6'6" redshirt sophomore from Guyton, Ga., Austin averaged 14.5 points and 18.5 rebounds for the Hawks (8-1) last week in games against Brewton-Parker College (JV) and the College of Central Florida.

"I'm thankful for this honor, but I never get satisfied," said Austin.  "I always want to get better every day."

In his first nine games this season, Austin has averaged 11.3 points and 11.8 rebounds per game.  His rebounding average is tops in the GCAA, and he leads the conference in defensive rebounds (66) and total rebounds (106).  In addition, Austin's 10 blocks place him seventh in the conference.

"I'm proud of Demontrez because he is a guy who has worked extremely hard on improving his game since the day he arrived in Waycross," said head coach Cory Baldwin.

According to KSU's athletic department, Austin will join the Owls for the 2015-2016 season.  The program is a member of the NCAA's Division I Atlantic Sun Conference.

"I truly believe that you should go hard in everything you do on and off the court, because someone else would give anything to be in your position," Austin said.  "I'm thankful to KSU's coaching staff and players for making my decision an easy one.  I'm also thankful to all of my teammates, coaches, and the faculty and staff at SGSC."

KSU head coach Jimmy Lallathin called Austin a "high-motor guy" who "has a tenacity for the game."

Austin is the 37th player in Baldwin's program to sign with a four-year college or university since 2009.