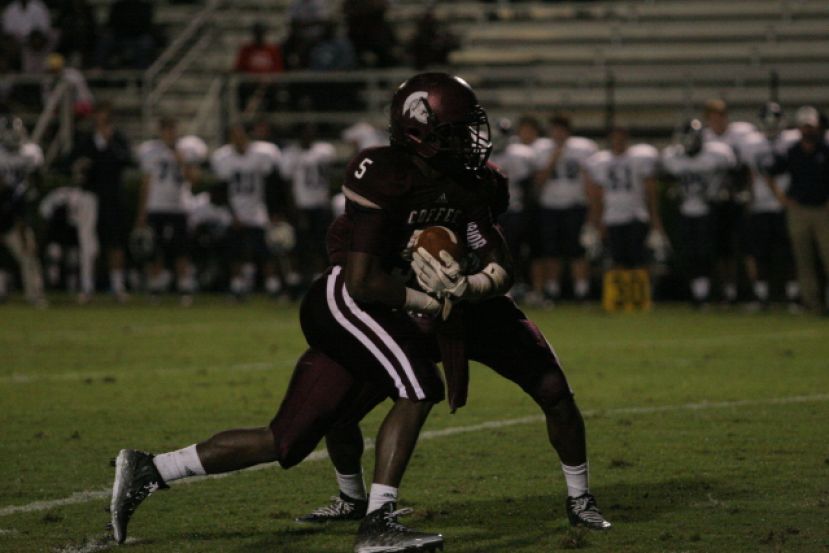 Robert Preston Jr./Douglasnow.com Coffee's Demetrius Davis, seen here in a game earlier this season, blocked a punt and scooped up the loose ball for a Trojan touchdown against the Allatoona Buccaneers Friday night. It was one of two Coffee touchdowns in the game. Allatoona won 45-14.

Early in the first quarter, things looked good for the Coffee Trojans in their second round playoff game against the Allatoona High Buccaneers in Acworth. After the Bucs held the Trojans on their first possession, Coffee’s Demetrius Davis blocked an Allatoona punt then scooped it up and ran nine yards for a touchdown. Austin Lord’s point after was good and the Trojans held a 7-0 lead.

On Allatoona’s next possession, the Buccaneers kicked a 36-yard field goal and cut the lead to four. Then the Allatoona offense started clicking on all cylinders. The Bucs put up 31 first-half points then added 14 more in the second half. Coffee, meanwhile, managed just one more touchdown – a first-half score by Lecarvius Sears. Allatoona won the game 45-14 and ended the Trojans’ season at 10-2.

“We just got whipped in every phase of the game tonight,” said head coach Robby Pruitt. “We’re proud of our kids and the season they had. But we just didn’t play well tonight. And when you don’t play well in the playoffs, you don’t get a second chance.”

After a pair of five-win seasons in Coach Pruitt’s first two years, the Trojans, playing in 5A after a long stretch in Georgia’s highest classification, reached double-digit wins for just the fourth time in school history. The last time a Coffee team won 10 games or more was 1982, when the Trojans went 12-1 under former head coach Bonwell Royal. Pruitt and Royal are the only Coffee head coaches to win 10 or more games.