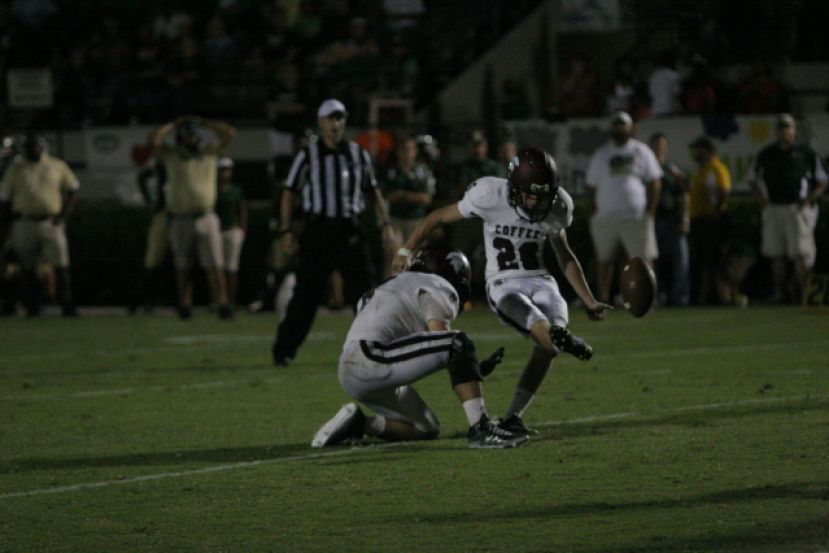 Quarterback Tyree Paulk threw three touchdown passes and rushed for one more while kicker Austin Lord was perfect on both extra points and field goals in the Coffee Trojans’ 34-0 win over the Richmond Hill Wildcats in Richmond Hill Friday night. The win moved the Trojans to 8-1 on the season (6-1 in region play) and secures a home playoff game for at least the first round when the postseason begins.

The Trojans were efficient and calculating as they methodically dismantled the Wildcats from the moment the game began. The Coffee offense scored on five of six first-half possessions while the defense disrupted Richmond Hill all night. The Wildcats crossed midfield just once, and that came when Richmond Hill recovered a Coffee fumble early in the third quarter.

Paulk completed touchdown passes to Tray Bryant (20 yards), Jalen Wilkerson (five yards), and Jackenize Walker (20 yards), and scored on a 30-yard keeper to steadily build the Trojans’ lead throughout the night. Lord made all four extra points and kicked field goals of 24 and 30 yards on the night.

Nearly all of the Trojans’ points came in the first half; Coffee led 31-0 at halftime. Over the final two quarters, the offense struggled a bit and managed just three points, which came on Lord’s second field goal of the night on Coffee’s first possession of the third quarter.

Though the offense sputtered in the third and fourth quarters, the defense kept the pressure on and never allowed Richmond Hill to take advantage of any Coffee mistakes. The Trojans turned the ball over three times – on two interceptions (one by Paulk and the second by Jeremiah Ashley) and a fumble – but the Wildcats could never capitalize on the Coffee miscues. Defensive end Cam Davis stood out on the defensive side of the ball; he finished the night with two sacks and two forced fumbles.

The Trojans finish the regular season next week at Jardine Stadium against Bradwell Institute. The playoffs begin the following week.