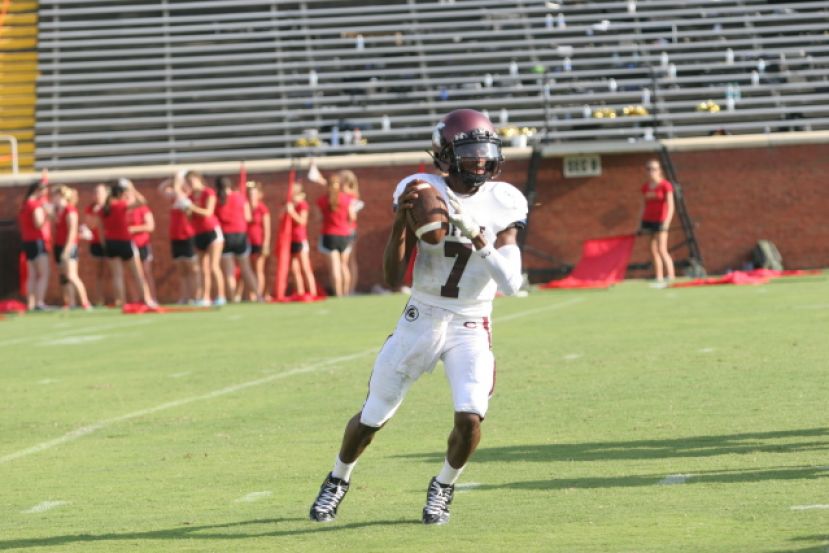 Robert Preston Jr./Douglasnow.com Coffee quarterback Tyree Paulk, seen here against North Oconee in the season opener, scored two touchdowns and threw for a couple of more as the Trojans trounced the Effingham County Rebels 58-26 in Springfield.

It was a tale of two halves tonight between the Coffee Trojans and the Effingham County Rebels in Springfield, Ga. During the first half, the two teams looked evenly matched and headed for a barn-burner. In the second half, however, the Trojans took control and outscored the Rebels 34-7 to cruise to their second region win 58-26.

“We played a lot better in the second half. We were very flat in the first half. We had to regroup and do better. Our defense played well in the last two quarters,” said Coffee head coach Robby Pruitt following the game. “I think we played with more emotion and passion. It just took the first half for us to wake up.”

And wake up indeed did the Trojans. While they didn’t play that poorly in the first half – Coffee took a 24-19 advantage into halftime – they didn’t play with any sense of urgency. The Rebels were also a 3-1 team that was quite capable of pulling off the upset, especially since they were playing at home. And for a while, it looked like Effingham had a chance.

The Rebels hung with the Trojans nearly score for score during the first half. The Trojans struck first when quarterback Tyree Paulk scampered into the end zone early in the first quarter. Austin Lord’s point after put Coffee up 7-0. Effingham answered with a score of its own on the next drive. The PAT was no good and the Rebels trailed by one. On the Trojans’ next possession running back Lecarvius Sears scored on a 27-yard run. After the extra point, Coffee held a 14-6 advantage. Early in the second quarter, the Rebels struck again. They went for two but failed to get in the end zone. With 11:51 left in the half, Coffee was up 14-12. Paulk would later score again to give the Trojans a 21-12 lead. Effingham wasn’t about to give up; the Rebels tacked on another touchdown to get within two. Then, with time winding down in the second half, Lord kicked a 28-yard field goal. At the half, the Trojans were ahead 24-19.

The second half, however, is where the Trojans forced their will upon the Rebels. Chris Swinson (2) Demetrius Davis, Jeremiah Ashley, and Cameron Davis all scored in the second half. Defensive back Jackenize Walker also finished the night with a pair of interceptions for Coffee. The Rebels, meanwhile, found the end zone just once in the final two periods. When the final second ticked off the clock, the Trojans won in convincing fashion 58-26.

Next Friday night, Coffee welcomes a winless Statesboro Blue Devils team to Jardine Stadium for another important region showdown. The Trojans are 4-1 overall and 2-1 in region play.

More in this category: « Coffee picks up first region win with 28-7 defeat of Glynn Academy Coffee takes care of Statesboro 35-7 »