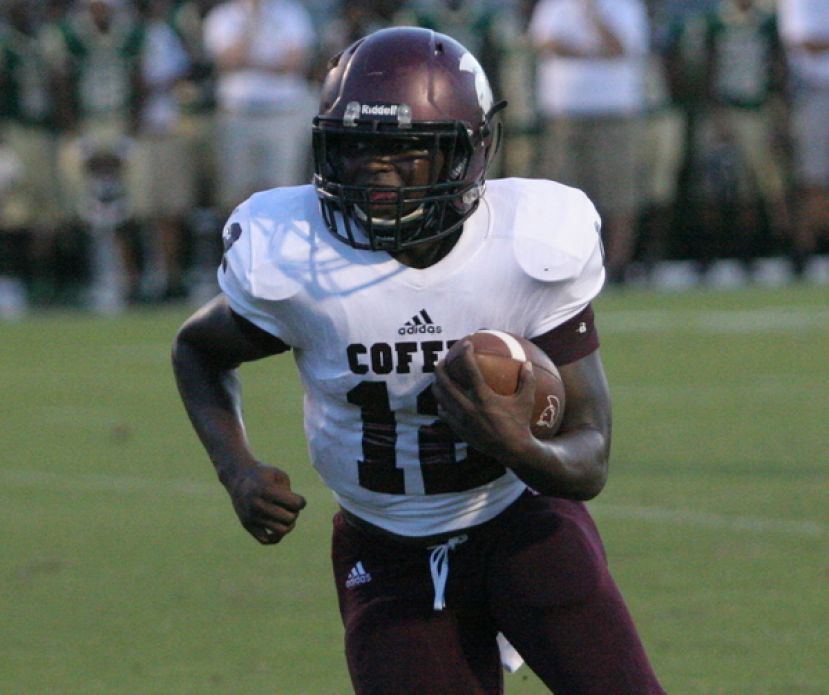 Robert Preston Jr./DouglasNow.com Coffee quarterback A.J. Wilkerson threw a touchdown pass to Antonio Dawson and rushed for another score in the Trojans' 30-20 loss to the Northside-Warner Robins Eagles on Friday.

The Coffee Trojans’ second road trip of the year didn’t go according to plan. Coffee suffered its first loss of the year to the Northside-Warner Robins Eagles in Warner Robins 30-20 in a battle of two top-10 teams. The Trojans are now 6-1 overall and 0-1 in region play.

The Eagles scored from all over the field and on both sides of the ball. After Coffee’s opening drive ended in a punt, Northside’s Corey Munson put the Eagles on the board first with a 53-yard field goal. The Trojans answered with a 73-yard screen pass from A.J. Wilkerson to Antonio Dawson. That gave Coffee a 7-3 lead with about eight minutes left in the first quarter. The score would be the Trojans’ last points of the first half.

Munson would close the gap to 7-6 on his second field goal in as many possessions. After another Coffee punt, Munson kicked his third field goal to go up 9-7. The Eagles wouldn’t look back. Northside intercepted a Wilkerson pass on Coffee’s next possession and returned it for a touchdown. On the very next drive, the Eagles picked off another pass. Northside’s offense quickly scored again. With just over a minute left in the second quarter, the Eagles had a comfortable 23-7 lead. Coffee ran the clock out and went into halftime trailing by 16.

The third quarter opened on a positive note. The Trojans held the Eagles and then launched a 64-yard drive that ended with a one-yard touchdown run by Wilkerson. Wilkerson and company went for two but didn’t make it. With 6:30 left in the third quarter, the Trojans were trailing 23-13. Coffee’s optimism didn’t last long, however; the Eagles quickly scored again to go ahead 30-13.

Wilkerson then took the Trojan offense on a methodical 80-yard drive that bled into the fourth quarter. A couple of big plays put Coffee deep into Northside territory. The Trojans’ big running back, Josiah Killebrew, appeared to score from the three-yard line on fourth down. But the officials ruled him down at the one-foot yard line, which gave the ball back to the Eagles. The Coffee defense then forced a big Northside miscue and made it hurt. The Eagles fumbled and Keyshawn Davis scooped up the ball and ran it 38 yards for a touchdown. With 7:32 left in the game, the Trojans were down by 10, 30-20.

Coffee had opportunities to score over the final several minutes but came up empty each time. The Eagles finally put the proverbial nail in the coffin with a third interception, this one at the goal line when the Trojans looked to be on the verge of scoring a late touchdown.

The loss is Coffee’s first of the year and sets up a very difficult final three games of the season. The Trojans travel to Valdosta next week for another important game, this time against the Wildcats in Bazemore-Hyder Stadium. Kick-off is scheduled for 8 p.m.