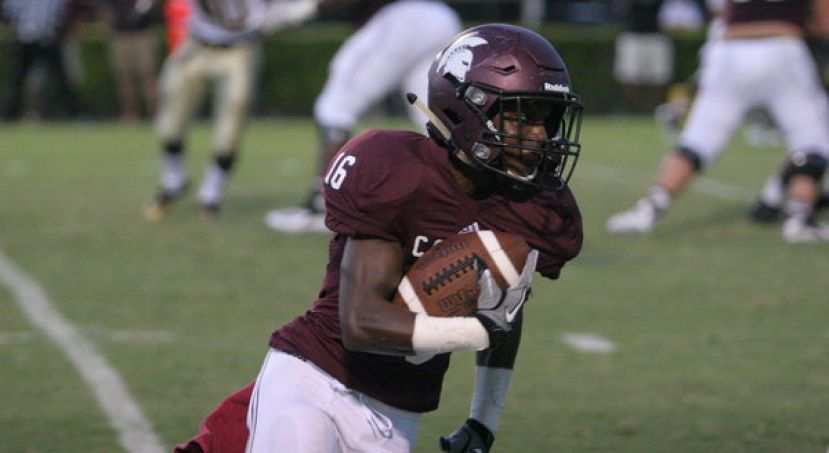 The Coffee Trojans came into their game against the Salem (Conyers) Seminoles Friday night as 34-point favorites. Nobody told the Seminoles they were just supposed to roll over and lose without a fight. The Trojans won 23-6 but it was neither easy nor pretty.

The two teams fought to a stalemate in the first quarter. The Trojans, playing again at home, took the opening kick 43 yards out to midfield. And that’s about where they’d stay for the entire first quarter. On each possession, Coffee would move the ball a few yards either way then punt, fumble, or turn the ball over on downs. The Seminoles always ended up with the ball deep in their own territory and just couldn’t put any kind of drive together. They would end up punting to Coffee and the cycle would repeat itself.

Finally, late in the first quarter, the Trojans started moving the ball. On the back of two big runs from junior running back/defensive back Josiah Killebrew that combined for over 50 yards, Coffee moved into the red zone for the first time all night. The end of the first quarter interrupted the drive. But when the second period began, the Trojans continued moving, eventually scoring on an eight-yard run by Antonio Dawson. With 9:23 left in the first half, Coffee had a 7-0 lead.

Neither team scored again until about halfway through the third quarter. Coffee capped a 67-yard drive on its first possession with a 28-yard run by B.J. Hodge. After Poncho Rivas’s extra point cleared the uprights, the Trojans had a 14-0 lead. Salem answered two possessions later on a 54-yard pick six by Salem’s Artemus McCorkle (one of three Coffee turnovers on the night – two interceptions and a fumble). The Seminoles couldn’t convert the two-point attempt and trailed 14-6 with 3:17 left in the third quarter.

With 37 seconds remaining in the third, Hodge scored his second touchdown of the night on a two-yard scamper to put the Trojans ahead 21-6. Coffee added a safety with 3:15 left in the game to take a 23-6 advantage. Killebrew led a group of Trojan tacklers that sacked quarterback Donald Wilson in the end zone. After the safety, the Trojans ran out the clock and slipped away with a 23-6 win.

Coffee is now 2-0 on the young season. Next week, the Trojans travel to Waycross for a showdown with Ware County at 7:30 p.m.