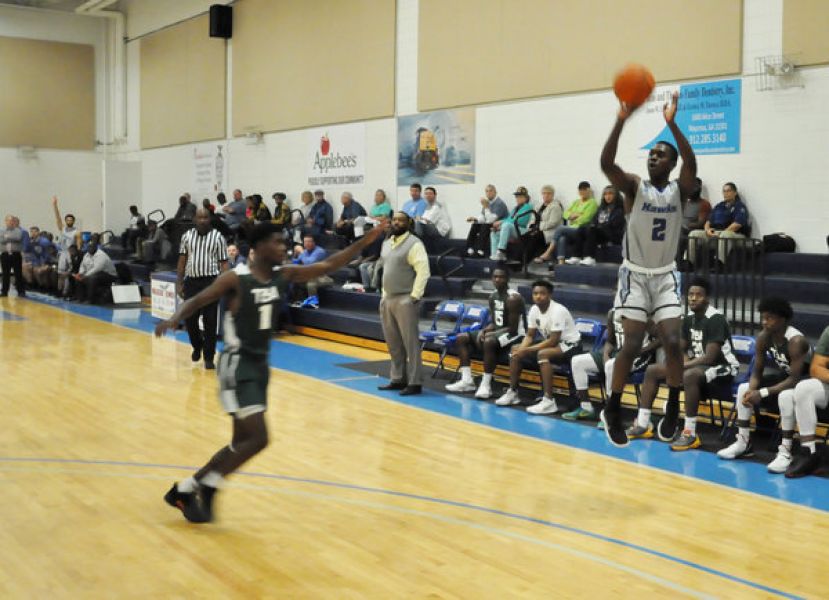 Luke Lawson’s three-point shot at the halftime buzzer ignited both an offensive and defensive spark for the South Georgia State College Hawks Monday night as they defeated The Basketball Academy (TBA) 92-57.

The Hawks (10-3) endured two ties and four lead changes in the first half and never led by more than 10 points. Trailing 22-12 with 14 minutes remaining, TBA outscored the Hawks 14-6 to pull to within two. The Hawks answered with a 15-3 scoring run of their own, capped by Lawson’s buzzer-beater to lead 43-29 at the break.

“I think our defense is getting better each game,” said head coach Cory Baldwin. “My hope is we will come back from the break and keep getting better.”

Nate Louis led the Hawks with another complete game of 20 points, five rebounds, four assists, and three steals. Starter Tracy Hector returned to the lineup Monday night after battling an injury and was also an offensive and defensive force. Hector finished with 15 points, seven rebounds, five assists, three blocks, and two steals. Marquise Jackson and Dwayne Wilson each had 11 points in the win.

The Hawks will enjoy the Christmas break and then return to action Friday, Dec. 29 at home against Summer Hill Post Graduate. Tip for the game is set for 4 p.m.