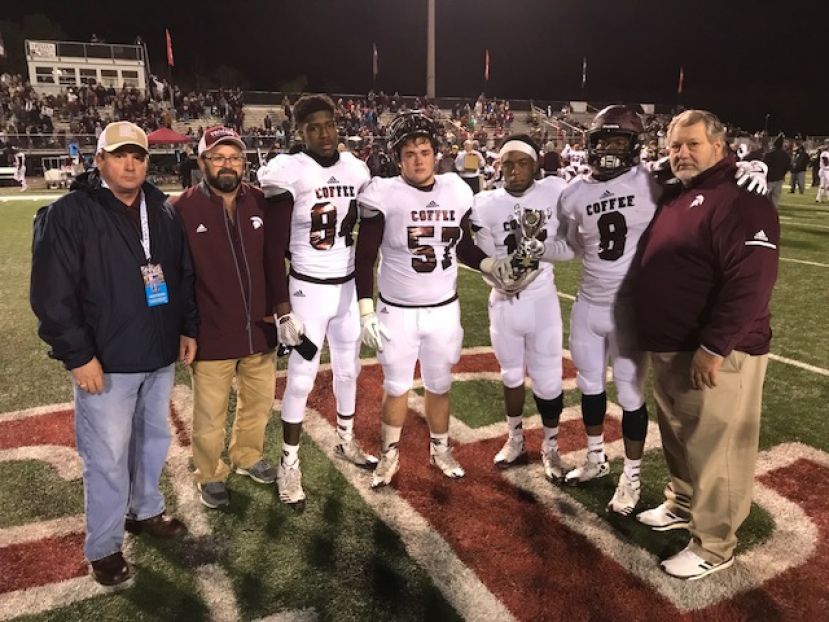 In a guest editorial that appeared in The Denver Post over a year and a half ago, Douglas Groothuis described football in the following terms: “For Americans, ‘football’ involves men in elaborate and expensive exoskeletons who try to run or kick an oblong object into their opponents’ end zone. This requires no little mayhem. It is all about taking down opponents, which demands collisions, concussions, contusions, and more.” In short, it’s a brutal, violent game reserved for the biggest of the big, the fastest of the fast, and the toughest of the tough.

But you couldn’t tell that by walking along the east side of the Lee County High School Trojans’ stadium Friday night, where the Coffee Trojan players had gathered. There, grown men and players still wearing those elaborate and expensive exoskeletons wept and embraced each other openly. The hours and hours of practices, tens of thousands of pounds lifted in the weight room, miles and miles of running, and, in the last seven days, the immeasurable weight of crushing disappointment, had left them battered, bruised, and crying.

Coffee lost its first ever bid for a state championship in Lee County 28-21 in overtime in Leesburg after a snowstorm in Atlanta forced the postponement of the game last week, which would have been played at Mercedes Benz Stadium.

Coffee led the game for 45:46. Even after Lee tied the score at 21 with just over two minutes left, Coffee had a chance – an opportunity all but gifted to them. It came down to two and a half seconds, a 29-yard field goal, and a championship trophy on the line. The game was actually a story of two halves. One set of Trojans controlled the first half, then momentum shifted to the other set of Trojans for the final two-plus periods. Here’s how it all played out.

Things were pretty quiet for most of the first quarter. Lee took the opening kick but couldn’t do much. They punted and gave Coffee pretty good field position. However, Coffee couldn’t muster a drive, either, and ended up punting as well. The Coffee defense stymied Lee one more time and forced another punt. Coffee started their drive on their own 47-yard line. It didn’t take long to move downfield and find the end zone. Running back Jameon Gaskin scored the first ever Coffee Trojan touchdown in a state championship game on a three-yard run with 4:03 left in the first quarter. After a successful extra point, Coffee had a 7-0 lead.

Neither team scored again until R.J. Ringold picked off a Jase Orndorff pass and nearly returned it for a touchdown. He was chased out of bounds at the Lee two-yard line. A couple of plays later, Gaskin punched the ball in for his second touchdown of the night and a 14-0 lead with 5:45 remaining in the half. However, Lee returned the ensuing kick for a touchdown and narrowed the gap to 14-7. Not to be outdone, Milton Jackson took Lee’s kick down to the Lee 39-yard line, which eventually led to another short Jameon Gaskin touchdown run. With just 67 seconds left in the first half, Coffee had what appeared to be a comfortable 21-7 lead.

But 67 seconds was enough time for Lee to put up a few more points of their own. Orndorff led his offense on an 80-yard drive that spanned just 57 seconds. He capped the drive with a touchdown pass to Joshua Asbury to get within a score at halftime.

In the third quarter, Coffee needed to make a statement. They had moved the ball seemingly at will and appeared to be in control of the game. A touchdown on their opening possession would have gone a long way in establishing even more dominance over Lee during the second half.

A big penalty against Lee on the kick gave Coffee the ball at the Lee 36. Then, on the first play from scrimmage, Coffee fumbled and Lee recovered. Lee couldn’t do anything, though, and turned the ball over on downs. The two teams traded punts but the turnover bug bit Coffee one more time. After taking a big hit – maybe the biggest of the night – quarterback Wade Sumner lost the ball and Lee recovered. That led to a 33-yard field goal attempt by Lee that missed its mark. Coffee took over on their own 20. Things were looking good until a pass ended up in the arms of a Lee defensive back. In case you’ve lost count, that’s three turnovers on Coffee’s first four possessions.

Orndorff and crew began their drive on the Coffee 46. They were moving the ball well – until Marquavious Jefferson got involved. Orndorff took aim for the end zone on the drive and Jefferson was there and intercepted the pass. That was the first of two big opportunities Coffee had to win the game.

Sumner and company set off on a slow and methodical march to the end zone. With time ticking off the clock in chunks, all they needed to do was get a couple of first downs and either score once more or run it on out – just like they’ve done several times this postseason. Coffee’s stable of running backs were able to find some room and pick up a first down or two. However, the drive stalled at midfield and Coffee punted.

Lee started what would be its final drive in regulation at their own 21. The Coffee defense, which had played well all night, seemed to be sticking with its plan – concede yards on short passes underneath then tighten the screws close to the end zone. Except that Orndorff really didn’t get that close to the end zone before he delivered a veritable death blow to Coffee. He connected with Drequan Garmon for a 30-yard touchdown pass that tied the game at 21 with 2:14 remaining.

Still, despite the setback, Coffee wasn’t done yet. Lee squibbed the kick and Coffee picked it up at their own 38. Working with a short field and enough time to cover the distance, Sumner and the offense went to work. A pass interference call against Lee practically put Coffee in field goal range. Then, Milton Jackson caught a Sumner pass and fumbled. The ball ended up squirting another 10 or 12 yards downfield, which actually worked out well for the offense; Coffee recovered on the 12-yard line. Sumner let the clock run down to 2.5 seconds before he called a timeout. And that set up a 29-yard field goal for Pancho Rivas.

With a state title on the line, Rivas lined up his kick. The stage was set and he was ready. Unfortunately, a low snap threw off Rivas’s timing just enough to cause him to push the ball to the right. The ball hit the upright and fell harmlessly to the turf as time expired. The game wasn’t over but Coffee had missed a golden opportunity to win its first state championship.

In overtime in high school, both teams start at their opponents’ 15-yard line. There is no clock and each team gets an opportunity to score. The overtime period goes on until a team wins. Lee got the ball first in overtime and scored on an 11-yard pass from Orndorff to Garmon. Coffee took its turn trailing 28-21 for the first time all night.

Coffee never gave itself much of a chance to keep the game going. On third down, three straight penalties backed them up not too terribly far from midfield. After starting on the 15, Coffee faced third and 31 from the 36. Sumner took the snap and dropped back. He didn’t immediately have an open receiver. Under pressure and on the run from Lee’s defense, he launched a pass toward the end zone that Lee intercepted, ending Coffee’s season right there.

The Coffee Trojans finished the season as Class 6A state runner-up with a 10-4 record. It’s Coffee’s highest finish in program history. It was also head coach Robby Pruitt’s second appearance in the state finals in Georgia. He has yet to win a state championship outside of Florida.

“This is tough, real tough. We just didn’t make the plays we needed to at the end. There’s nothing you can say. It’s a heartbreaker. Turnovers hurt us. The players are gonna feel the sting and there’s nothing I can say to take it away. But I am proud of how they played,” said a teary-eyed Coach Pruitt after the game.

More in this category: « Lawson leads offensive spark as SGSC pulls away from Arlington Country Day Second half surge lifts Hawks basketball over The Basketball Academy »
Login to post comments