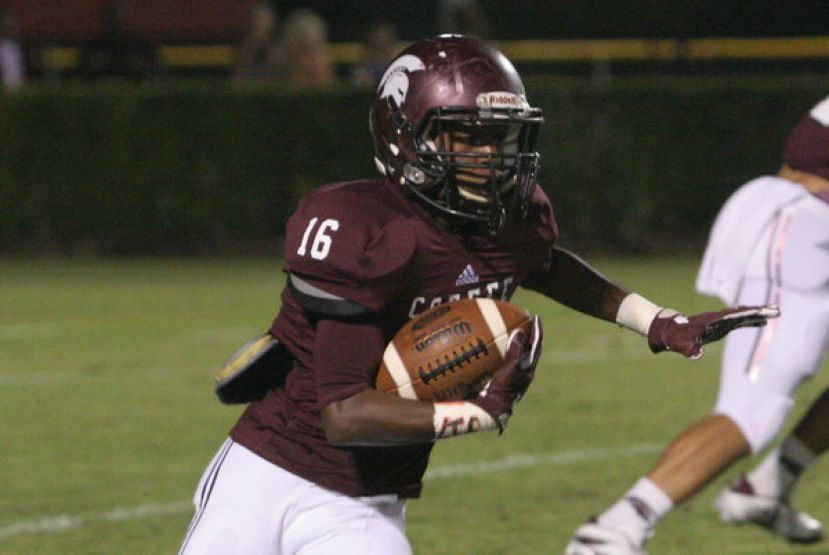 Robert Preston Jr./DouglasNow.com Trojan running back Antonio Dawson, seen here against Northside Warner Robins earlier this year, carried Coffee's running game after Jameon Gaskin and Marquavious Jefferson went down with injuries against the Alpharetta Raiders Friday night. The Trojans defeated the Raiders 28-14 and advanced to the semifinals of the state playoffs for the first time since 1981.

Maybe that will change. Instead of having to go back 35 and 36 years to discuss Coffee’s gridiron legacy, maybe people can talk about the teams of the last few years. Maybe Max Hughes, Demetrius Davis, Wade Sumner (Todd Wade’s nephew), Jameon Gaskin, Derrick Newton, Milton Jackson, Jordan Knight, the Jefferson twins, and the rest of the Trojans over the last couple years will be talked about in the same hushed tones as those players of the early ‘80s.

With their win over the #1 seed Alpharetta Raiders Friday night in Alpharetta, the 2017 Trojans have done something only one other Coffee team has ever accomplished: Advance to the semifinals of the state playoffs. The last time this happened, it was 1981. The following year, in 1982, the Trojans went to the quarterfinals. The roles are reversed this time; last year, Coffee went to the quarters and this year the Trojans are in the semis.

The Trojans never trailed against the Raiders. At the same time, it never really felt like Coffee had the game in hand. Part of that was due to injuries – though defeated, the Raiders left a slew of fallen Trojans in their wake. At one time, three defensive starters were out of the game, including Marquavious Jefferson (who had an interception and a rushing touchdown) and Jameon Gaskin. And part of it was due to Alpharetta’s Matthew Downing, a pro-style quarterback with a huge arm and the ability to make big plays.

Even when the Trojans had a commanding lead in the first half, it just never felt like the Raiders were that far behind. It always seemed like Alpharetta was just a play or two away from running away with the game. The Coffee defense, however, managed to keep the Raiders out of the end zone most of the night.

All of the scoring took place in the first half. Coffee carried a 28-14 lead into halftime and the score never changed through the third and fourth quarters. After holding the Raiders on their first possession, Sumner led the Trojan offense on an 83-yard drive that ended with a 21-yard touchdown pass to Milton Jackson, Sumner’s 21st touchdown toss of the year. The Raiders answered with a drive of their own. However, Downing made an uncharacteristic mistake and threw an ill-advised pass into the end zone. Coffee’s Marquavious Jefferson was there and intercepted the pass. He ran the ball out to around the 10 yard line before getting tackled.

From there, the Trojans went on another scoring drive. Sumner broke a long run that put the ball deep in Alpharetta territory. A few plays later, Marquavious Jefferson capped the drive he started with a 16-yard touchdown run. With 33 seconds remaining in the first quarter, Coffee was up 14-0.

Neither team scored again until 7:36 was left in the first half. Coffee ended up with great field position following a Raider punt and scored its third touchdown of the night, this time on a short run by Sumner. The Trojans had the momentum and a seemingly comfortable 21-0 lead.

On their ensuing possession, the Raiders went 94 yards and scored on a pass from Downing to tight end Luke Estes. With 4:32 remaining in the half, Coffee was up 21-7. The Trojans scored two minutes later on a 31-yard pass from Sumner to Raquan Burch to take a 28-7 lead. Not to be outdone, Downing shifted the momentum his team’s way after covering 80 yards in about 90 seconds to cut Coffee’s lead in half, to 28-14. His target was again Estes and for a few moments, the duo looked almost unstoppable.

In the second half, neither team could score any points. Coffee played with its top two running backs – Gaskin and Jefferson – sidelined by injury. Sophomore Antonio Dawson played very well in their absence but the running game wasn’t the same without those two in the game. Still, the Trojan offense did what it needed to do. The defense, meanwhile, played as well as that group has all year.

Whether it was the game plan or not, the defense seemed willing to give up soft yards and let Downing and company move the ball downfield. Then, when inside the red zone, they stiffened and stopped the Raiders in their tracks. Two drives in particular come to mind. One came early in the third quarter, on Alpharetta’s first drive. The Raiders got into field goal range and attempted a 30-yarder. Coffee blocked the kick and KJ Smith recovered. He returned it to the Alpharetta 40-yard line. The Trojans didn’t get any points out of the miscue but they did flip the field and take some momentum from the Raiders.

A few possessions later, the Raiders drove down to the Coffee one-yard line. On fourth down, the defensive line, all four of them – Derrick Newton, Jordan Knight, Javionte Martin, and Josiah Killebrew – stuffed the Raiders for no gain. Coffee took over on downs with 7:50 left in the game and a 14-point lead. The Trojans controlled the clock for the rest of the contest and won the game 28-14.

Coffee will be back on the road again next week, this time to face the Tucker Tigers, who defeated the Allatoona Buccaneers Friday.

For the Trojans, though, the big question is injuries. The players they lost against Alpharetta have got to get healthy for the semifinals. Gaskin did return later in the game and made some big plays for Coffee on the last few drives. Marquavious Jefferson, however, did not. He is one of several who got knocked out of Friday’s game at the hands of the Raiders.

There won’t be long to bask in the Trojans’ accomplishment. Preparation for Tucker will begin Saturday. As the coaches and players are getting ready for just the second semifinal appearance in Coffee history, fans will be talking. Will they mention this latest crop of Trojans in the same hushed reverence as they do that 1981 team? If they don’t, they should.