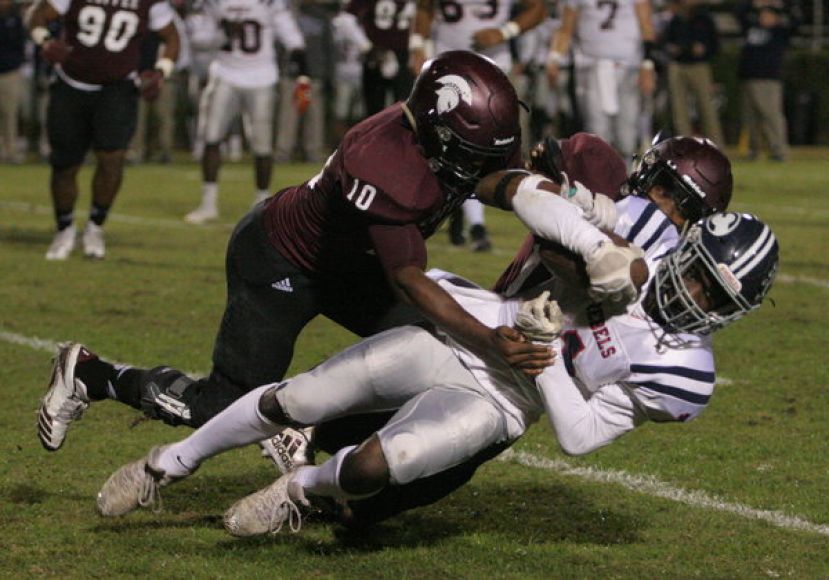 It’s not uncommon to hear fans or players of losing teams say the game was a lot closer than the score indicated. Tonight, the winners could say that the game wasn’t nearly as close as the score might suggest.

The Coffee Trojans defeated the Effingham County Rebels 52-32 at Jardine Stadium in the first round of the state playoffs. The Trojans dominated the first half and took a 42-6 lead into halftime. In the second half, the Rebels gained a little momentum and put 26 points on the board. While the Trojans primarily played younger kids on offense, head coach Robby Pruitt and staff kept the first team defense in the game most of the third and fourth quarters. What the Rebels did was impressive but it was simply too little, too late.

Coffee dominated the first half, scoring touchdowns on every possession. Running back Jameon Gaskin scored three of those touchdowns. The other three came on a 73-yard pass from quarterback Wade Sumner to Dalrone Donaldson, a 17-yard pass from Sumner to Milton Jackson, and a 33-yard run by B.J. Hodge on a direct snap. Jose Rodriguez was perfect on extra points all night long. The Rebels managed just one first-half score. They fumbled the snap on the point-after and never even got the kick off. Coffee’s scoring barrage in the first half effectively ended the game by halftime; the Trojans led 42-6 and looked like they could score just as much as they wanted to.

The Rebels, however, made a few adjustments at halftime and refused to give up. If they couldn’t win, they were going to make it as close as possible. And for a few minutes, Effingham made the Coffee faithful more than just a bit nervous.

For most of the second half, the second and third team played on offense while the starters stayed in on defense. The offense understandably sputtered at times, though they did manage a touchdown on a short run by Hodge about halfway through the third quarter. Late in the game, with just over a minute to go, Rodriguez made a 37-yard field goal to put Coffee ahead 52-26. On the last play of the game, Effingham scored its last touchdown to narrow the gap to 20.

At the end of the game, Coach Pruitt commented on the first half but wouldn’t say much about the third and fourth quarters. “I was proud of our kids and how they played. We played some younger kids in the second half. It got ugly but they got to play. I think we played our most complete game in the first half. I thought we played a pretty good game,” he said.

The Trojans now move on to the second round. They will face the Evans Knights in Evans, which is near Augusta, next Friday. The Knights defeated the Drew Titans of Riverdale in their first-round match-up. Evans is the #1 seed from Region 3-6A and posted a perfect 5-0 region record. When asked about the Knights, Coach Pruitt said he didn’t know much about them. “We’re not good enough to look past anyone. We’ll get some film on them tomorrow and start breaking it down,” he said.