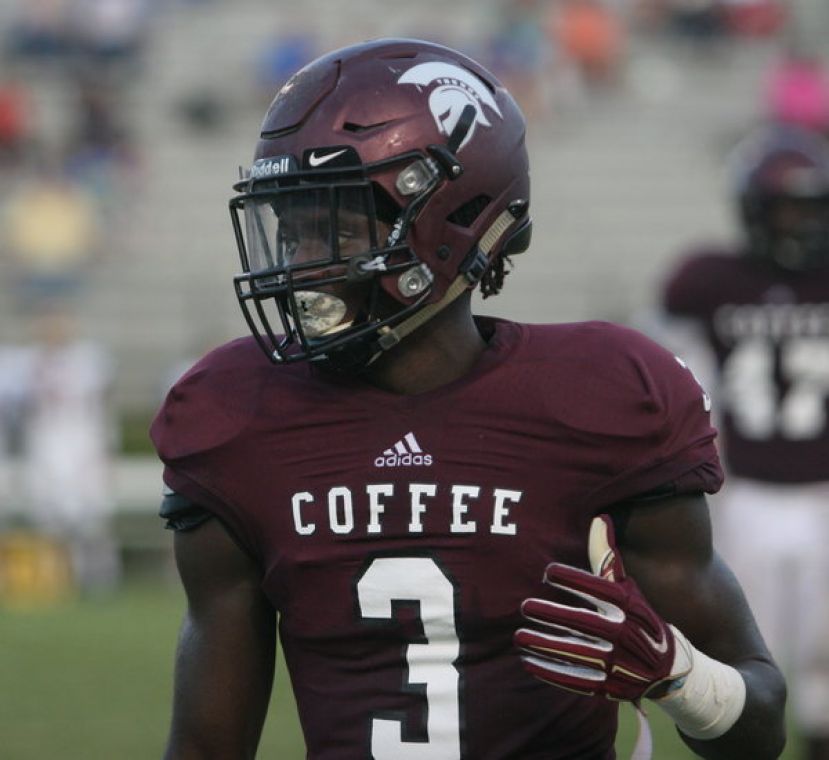 It’s not very often that I don’t know where to begin with a game story. Tonight, though, I simply don’t have the words. As I sit here at my computer lamenting the Trojans’ shocking 33-31 loss to the Tift County Blue Devils in Tifton, the various subplots, twists, and turns make my head hurt.

Should we talk about the 21 unanswered first-quarter points Tift County scored? Or the fact that after stumbling in that pivotal first quarter, the Coffee defense only allowed 12 points over the next three periods? Or maybe it’s worth mentioning Dalrone Donaldson’s two touchdown receptions. Of course no discussion of this game would be complete without covering what seemed to be a very involved group of officials. Then there is the issue of four missed point-after attempts, equally spread between kicks and two-point conversions.

But what people will really want to talk about is the final field goal with nine seconds remaining – the one in which Tift had three chances to kick from two different positions on the field while trailing 31-30.

Before we get to that – and we will definitely get there – let’s look at what set up the fateful kick. The Blue Devils unleashed their high-powered offense in all its fury against Coffee in the first quarter, scoring three times on long passes courtesy of the arm of quarterback Griffin Collier.

Down by 21, the Trojan offense finally showed some life in the second quarter. Early in the period, quarterback Wade Sumner found Donaldson on a 14-yard play for the Coffee’s first score. Four minutes later, after the Trojans blocked a Tift punt, Sumner hit Raekwon Burch to get Coffee within nine, 21-12. On the Blue Devils’ ensuing drive, with Tift moving the ball well, Coffee’s Marquavious Jefferson intercepted a Collier pass that gave the Trojans a great chance to score. However, a botched flea flicker led to a turnover. Tift’s Fernando Ramirez booted a 41-yard field goal near the end of the half to give his team a 24-12 lead going into halftime.

The Trojans received the second half kick. A good return put Coffee in position to put points on the board early. Sumner and crew did just that. Sumner broke a 65-yard run to score the Trojans’ third touchdown of the night. A third unsuccessful conversion put the score at 24-18 Tift. The Blue Devils answered with an 86-yard drive on their next possession to increase their lead to 30-18. Coffee then scored 13 unanswered points to take their first lead of the game.

Running back Jameon Gaskin capped an 80-yard drive with a four-yard touchdown run with 3:45 left in the third quarter to further put pressure on Tift. The Trojans were able to make an extra point, their only one of the night, to get within five. Coffee had the momentum and only trailed 30-25.

The Trojan defense made a pivotal stand against Collier and the Tift offense after Gaskin’s touchdown. Derrick Newton sacked Collier then forced Newton to throw an interception to Marquavious Jefferson, one that would have been his second of the night. However, the pick was negated by a Coffee penalty that gave new life to the Blue Devils. Another penalty, this one a pass interference call, gift Tift with first and goal from the three. The Trojan defense never broke and pushed the Devils back, eventually forcing Ramirez to try a 32-yard field goal. He missed and Coffee took over on their own 20.

The Trojan offense kept the ball on the ground and chewed up as much clock as they did yardage. Marquavious Jefferson and Gaskin pounded Tift’s defense on that final drive, wearing down the Blue Devils and eventually giving Sumner the opportunity to find Donaldson again for a 12-yard touchdown. The Trojans went for two and didn’t convert. With just under five minutes left in the game, Coffee had its first lead of the night, 31-30.

The Trojans held Tift on its next possession and took over with a chance to run out the clock and seal the come-from-behind victory. All they had to do was get a single first down. On fourth and a yard, they came up about six inches short. By this time, there was only a minute left in the game. With that Tift County offense, that was plenty of time.

The final drive started out well for Coffee. Collier went downfield but missed his target. Then two costly penalties – one a pass interference call and another a late hit call on Collier as he scampered out of bounds – gave Tift first down on the Coffee 39 with 39 seconds left in the game. The Blue Devils moved the ball to the Coffee 16 and were well within field goal range when Newton sacked Collier for the third time on the night, dropping him on the Coffee 28 and running the clock down to nine seconds in the process.

Here is where things went awry, to say the least.

Tift sent Ramirez out to attempt a 44-yard field goal. He missed the uprights but officials threw a flag for a false start and backed up the Devils five yards. Ramirez’s second attempt, this one from 49 yards, missed as well. However, this time Coffee got flagged for offsides. The officials moved the ball up five yards, putting it at the original spot and giving Ramirez a third try. This time, he made it and there were no flags. Only four seconds ticked off the clock and Tift had taken an improbable 33-31 lead with the game basically over.

Coffee only had five seconds to work with on the ensuing kick and the return unit tried to lateral their way into the end zone. They were unsuccessful and Tift escaped with a two-point win. After the game, a large crowd of stunned Trojan fans stared at the field in disbelief. Head coach Robby Pruitt, who normally always makes himself available to the media regardless of the outcome, headed straight for the locker room.