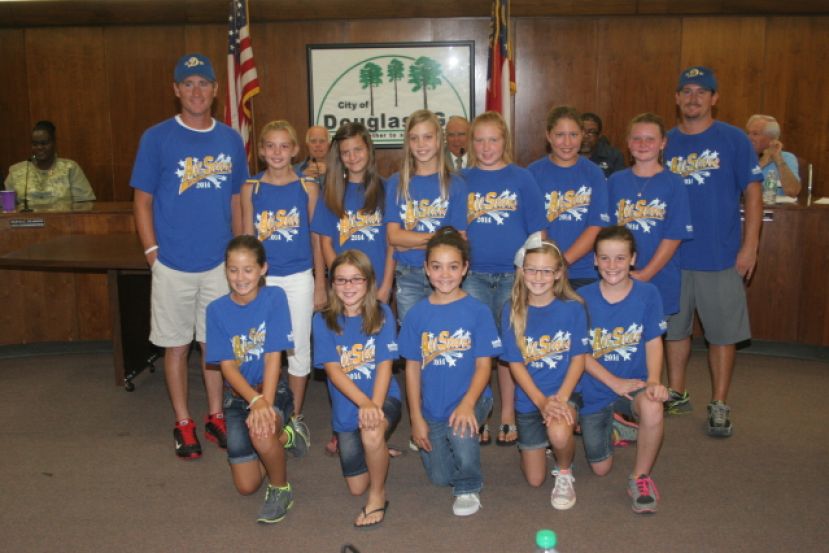 Robert Preston Jr./Douglasnow.com The Douglas-Coffee County Parks and Recreation Department Mite girls' softball team finished second in the state this summer. See the image gallery just above the "Comments" section for photos of the tennis and swim teams.

The Douglas City Commission meeting kicked off Monday night with three special recognitions. The spring and summer of 2014 has been a banner year of sorts for the Douglas Parks and Recreation Department athletic program. The recreation league teams from Douglas and Coffee County have always done well out-of-county competition but this year several teams performed exceptionally well.

Many citizens may not know it but the recreation department has a summer tennis program. Twenty-six kids participated in the program this summer. A number of players went to district and on to the state tournament in Moultrie. At state, local players brought home 10 total championship medals. Monday, three of those players, all of whom won a state championship in one or more events, were at the meeting: Ted Bagwell, Kaden Walker, and Jason Tanner. Their coach, Melinda Turner, was also present.

This year, all three girls’ fast-pitch softball teams won district and advanced to the state tournament. The 11 and 12 year olds, coached by Ronnie Graham and Ronnie Bullock, went to state and played two games in the tournament. The 13 and 14 year olds, coached by Tommy Woods and Darren Watson, placed fourth in the state. And the Mite girls, who were coached by Shannon Smith and David Miller, were state runner-ups. The Mite girls were at the city commission meeting Monday night.

The commission also recognized the Douglas Stingrays swim team, which won its first-ever state championship this year, defeating perennial state champion Oconee County by just seven points. The swimmers who are pictured won state titles in either individual or relay events. “This has been a goal of ours since we started placing second, third, and fourth. This year, we finally were able to get it done,” said C.M. Jenkins, head coach of the Stingrays.