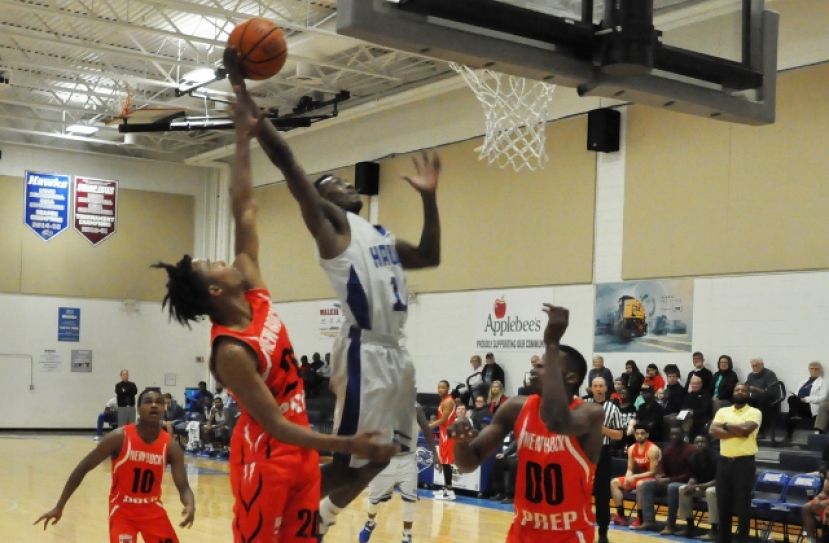 Zaire Cook led the Hawks (7-1) with a double-double of 18 points and 14 rebounds, while Zaquavian Smith finished with 17 points, four rebounds, and seven assists.

The Wolverines made things interesting in the second half as they slowly chipped away at the lead to get to within 10 points. Head coach Cory Baldwin pointed to the play of New Rock’s Ubong Okon as one of two factors that kept the Wolverines in the game. The 6’10” center from Port-Harcourt, Nigeria had 19 points, 18 rebounds, and six blocked shots.

“He (Okon) changed the game,” said Baldwin. “Our three-point shooting was not the best tonight, either, and that was another factor that kept things close. But I thought we played well defensively again, which ultimately helped us.”

The Hawks will enjoy the Thanksgiving break and then return to action on the road Nov. 30 against Florida State College at Jacksonville. The road trip continues Dec. 3 when the Hawks travel to Chapel Hill, N.C. to scrimmage the University of North Carolina’s junior varsity team. A six-game homestand begins Dec. 10 against Combine Academy-Orlando. Tip for the Dec. 10 game is set for 4 p.m.

More in this category: « SGSC swimmers take top spots in individual events at Berry College meet Trojans rally late but come up short against the Dalton Catamounts in the state quarterfinals »
Login to post comments