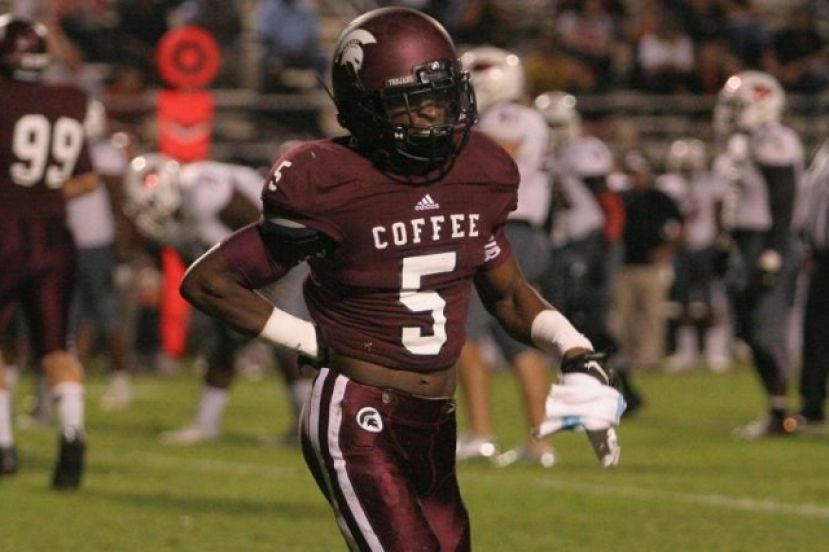 Robert Preston, Jr./DouglasNow.com Coffee's Demetrius Davis, pictured here coming off the field against Lee County earlier this season, was taken to a hospital by ambulance after suffering a possible concussion Friday night in the Trojans' second-round win over Alexander High. Prior to the injury, Davis scored four touchdowns.

The last two years, the second round of the playoffs has been the Coffee Trojans’ Achilles heel. After posting 9-1 regular season records both seasons, the Trojans won their first round game only to lose in the next round. Each year, they ended the season with 10-2 marks.

In 2016, Coffee, playing in a new classification and region, posted a 5-5 regular season record with only one region win. In spite having a more road to the playoffs, the Trojans stand at 7-5 and are headed to the quarterfinals – territory they’ve only been in three previous times in the history of the program – after defeating the Alexander High Cougars 42-34 in Douglasville Friday night.

The win took a heavy toll on Coffee; the Trojans’ leading rusher, Demetrius Davis, who scored four of Coffee’s touchdowns against the Cougars, left the game late in the fourth quarter in an ambulance after possibly suffering a concussion. EMTs transported Davis to an area hospital mainly as a precaution; however, his status for next week’s game against Dalton is uncertain and likely will remain so for several days.

The Cougars struck first Friday night. Both teams punted on their first possessions. When the Trojans punted, the Alexander return man ran the punt in for a touchdown and a 7-0 lead. Coffee answered on its next possession when quarterback Max Hughes led his team 80 yards into the end zone. Davis capped the drive with a three-yard scamper to tie the score at seven apiece with 4:35 left in the first quarter. Three and a half minutes later, Davis ran nine yards into the end zone to give Coffee a 14-7 lead. After holding the Cougars again, Davis found the end zone a third time to increase the Trojans’ lead to 21-7 with 6:49 remaining in the first half.

The Cougars rallied to score with 4:01 left in the half but missed the point-after to bring the score to 21-13. Just a few seconds later, Hughes found Tray Mizell for a 55-yard touchdown pass to increase Coffee’s advantage to 28-13. Alexander scored once more before the end of the half. At halftime, the Trojans led 28-20.

The third quarter opened with the Cougars getting the ball first. They were driving when Marquavious Jefferson intercepted a pass in the end zone to stop their advance. Hughes and company turned the takeaway into more points when Davis broke a 38-yard run for his fourth touchdown of the game. With 5:05 to go in the third quarter, Coffee was up 35-20. On Alexander’s ensuing possession, defensive lineman Derek Newton tipped a pass that landed in Y’Darius Baker’s hands. He returned the interception 30 yards for another Coffee score to put the Trojans ahead 42-20. The Cougars scored once again on their next drive. Coffee, however, still held on to a comfortable 42-27 lead.

For the rest of the third quarter and just over half of the fourth quarter, the teams traded possessions. Then, with under seven minutes remaining in the game, Davis, who was in the game playing defensive back, took a nasty hit and briefly lost consciousness. He lay on the field motionless for a short time, hushing the entire stadium. As he was carted off the field, he let the crowd know he was going to be fine. When play resumed, the Cougars scored quickly to get within eight points. With just over 6:00 in the game, the Trojans were still up 42-34.

Still, the game wasn’t over yet. The Trojans fumbled the kick and the Cougars recovered at the Coffee 28. The Coffee defense, which had played well all night long, stiffened and pushed the Cougars back, forcing them to punt. Once the Trojans had the ball, they simply ran out the clock for the win.

Next week, Coffee will make the long trek into the mountains to face the Dalton High Catamounts. This is just the fourth time in program history the Trojans have made it to the quarterfinals. In 1982 and 2008, Coffee advanced to the quarterfinals. In 1981, they went to the semifinals, where they lost to eventual state champion Warner Robins. The team will leave Thanksgiving Day for Dalton, where the players and coaches will spend the night before playing on Friday. The Catamounts are 12-0 after defeating the Lovejoy Wildcats Friday night.