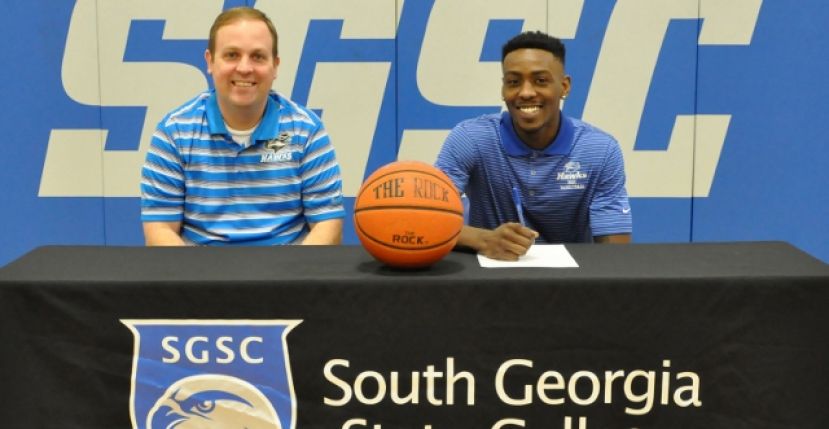 Contributed photo SGSC’s Zaquavian Smith (right) signed a letter of intent this week to continue his basketball career at Nicholls State. Smith was also named the GCAA’s Player of the Week.

It’s been a good week for South Georgia State College’s Zaquavian Smith. He has been named the Georgia Collegiate Athletic Association’s (GCAA) Player of the Week and signed a letter of intent to continue his basketball career at Nicholls State.

“I’m excited about heading to Nicholls State, because I think it’s a great fit for me,” said Smith. “My family and the SGSC coaching staff played a big part in getting me to where I am now. A special thanks goes to them for pushing me and believing in me. Without God, none of this would have been possible.”

A 6’0” redshirt sophomore from Statesboro, Ga., Smith currently leads the GCAA in scoring, averaging 22.5 points per game. He has averaged shooting 50 percent from the field, 41 percent from the three-point line, and 79 percent from the free throw line. For his Player of the Week honor, Smith averaged 23.3 points, 4.6 rebounds, 4.6 assists, and three steals in games against Middle Georgia Prep, Combine Academy, and TAAG Academy.

“I’m very excited for Qua,” said head coach Cory Baldwin. “It’s a great honor to be selected as the Player of the Week, and I know he will be a great addition to Nicholls State.”

Smith is one of 54 players to sign a letter of intent with a four-year program since men’s basketball was established on the Waycross Campus in 2009. Nicholls State is a Division I member of the NCAA based in Thibodaux, La.