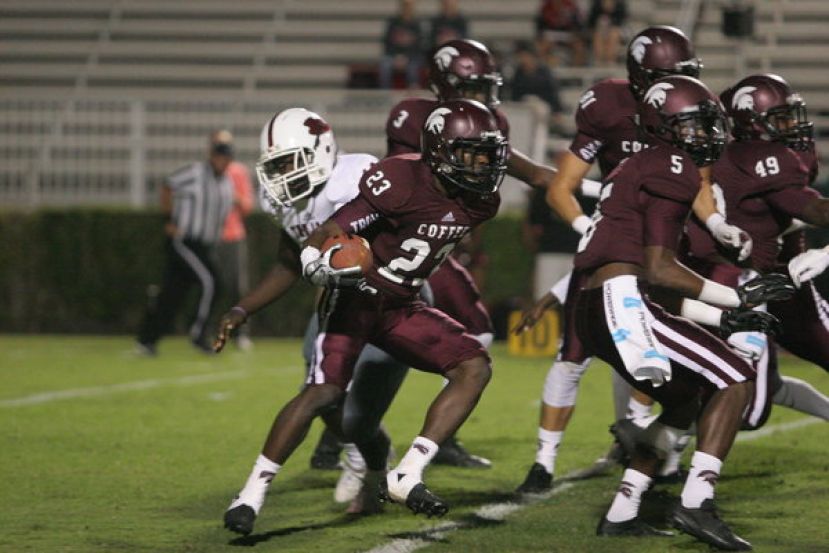 Robert Preston, Jr./DouglasNow.com Four of the five Trojans who scored touchdowns can be seen in this photo, taken last week against Lee County: Jarquavious Jefferson (23), Dalrone Donaldson (3), Tywone Brewton (49), and Demetrius Davis (5). Milton Jackson, who didn't find his way into this picture, also scored against Heritage.

When the Coffee Trojans fell behind 17-7 to the Heritage High Patriots in Conyers last night in the first round of the state playoffs, my first thought was, the we-don’t-play-well-when-we’re-out-of-school curse has reared its ugly head again. The Trojans missed a field goal and fumbled a punt, both of which helped the Patriots build a decent lead with just over six minutes to go in the second quarter. Coffee was struggling and didn’t seem to have it together.

Down by 10, the Trojan offense woke up. Coffee took advantage of a mishandled snap on a Heritage punt attempt and drove a short distance to the end zone. Running back Demetrius Davis capped the drive with his first of three touchdowns on the night to narrow the Patriots’ lead to 17-14. On Heritage’s ensuing possession, Jarquavious Jefferson intercepted a Caleb Pruitt pass and returned it 43 yards for a touchdown. With 1:59 left in the first half, the Trojans had jumped in front 21-17.

Coffee received the kick to start the third quarter and promptly went 61 yards for another score, this one on a 16-yard pass from Max Hughes to Milton Jackson. The touchdown and point-after gave the Trojans a 28-17 lead. A few minutes later, Hughes connected with Dalrone Donaldson for a 22-yard touchdown with 7:47 remaining in the third quarter. The Trojans, now up 35-17, were building a comfortable lead. After a Heritage punt, Hughes found Donaldson again for a 26-yard score with 4:37 left in the third period. That put Coffee ahead 42-17. The Patriots answered on their next possession with a score of their own to narrow the advantage to 42-24. That would be as close as they would get.

Through the end of the third quarter and into the beginning of the fourth quarter, Coffee would score two more times – both on runs by Davis. He scored from 76 yards and 25 yards to put the Trojans ahead 56-24. Neither team scored again and Coffee made the long trip back to Douglas with a convincing first-round playoff win under its belt.

Next week, the Trojans travel to Douglasville to face the Alexander Cougars. Alexander defeated Alpharetta 20-13 Friday to earn the opportunity to host the Trojans. All four teams from Region 1-6A advanced to the second round. Coffee is now 6-5 on the season.