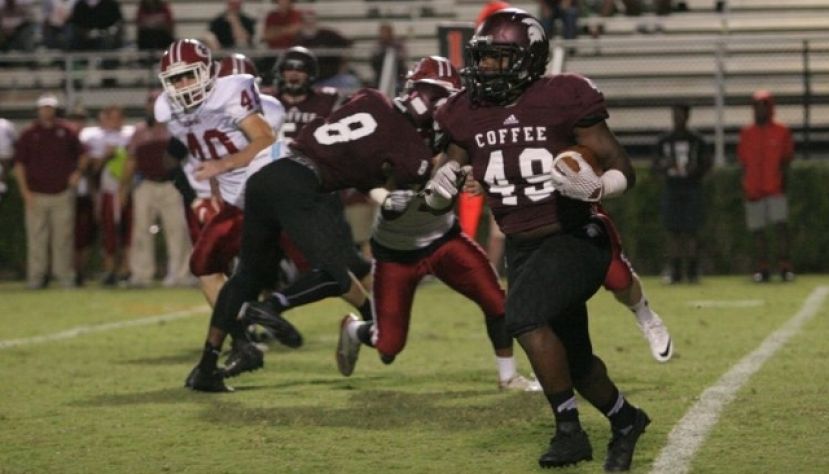 Once again, it wasn’t a case of what the Coffee Trojans’ opponents – in this case, the Northside (Warner Robins) Eagles – did; rather, it was a case of what the Trojans didn’t do. The Eagles defeated the Trojans 17-14 in a nail-biter in Warner Robins. Coffee scored once in the first half and once in the second half – and missed a pair of chip-shot field goals that would have been the difference in the ball game. “Special teams is so important,” said head coach Robby Pruitt after the game. “Last week, we made those field goals. This week, we didn’t.”

Tonight’s game was a showdown of two top 10 ranked teams in the 6A classification. Northside came into the game with one loss, a shocking defeat at the hands of the top-ranked Valdosta High Wildcats. The Eagles were ranked #2 in the state while the Trojans were ranked #10. A lot of pundits around the state didn’t think Coffee could compete with Northside. The Trojans proved they can play with any team in the region. They also showed once more that there are still some weaknesses they need to shore up.

The Eagles scored on their opening drive – after Coffee’s Y’Darius Baker intercepted a Northside pass but fumbled on the return. The Eagles recovered, regrouped, and scored the first touchdown of the night to take a 7-0 lead. On Coffee’s third possession (which was set up by a Derek Newton fumble recovery), the Trojans stalled on Northside’s 21-yard line. Coach Pruitt opted for a field goal that the Eagles blocked and recovered on their own 11-yard line. The defense held and forced a punt. The Coffee offense took over on their own 36-yard line and promptly marched downfield. Tywone Brewton capped the drive with a one-yard touchdown run. A successful point-after tied the game at seven with 3:07 left in the second quarter.

The Eagles struck again after the kick. They went 58 yards and scored once more to take a 14-7 lead late in the half. Coffee moved the ball well as the half drew to a close and found themselves inside the red zone but again unable to find the end zone. The Trojans finished the half with another missed field goal. At the half, Northside held on to a 14-7 advantage.

Coffee opened the third quarter with the ball. Their first drive stalled and the Trojans punted. Northside went 70 yards and kicked a field goal to go up 17-7. Two possessions later, Demetrius Davis scored from the half-yard line on fourth down to get Coffee within three with 8:14 left.

The Eagles then took the ball and proceeded to run out the clock with a long, run-heavy drive. Their plan was working beautifully until, with the ball at the Coffee goal line and another touchdown inches away, they fumbled. Coffee recovered and had one last shot at a comeback victory. However, only 30 seconds remained on the clock and the Trojans didn’t have any timeouts left. Max Hughes completed a couple of passes and moved the ball but time ran out before Coffee could score.

The loss drops the Trojans to 5-3 on the season and 1-1 in region play. Next week, Coffee travels to Valdosta for a showdown with the state’s #1 team. It doesn’t get any easier from there; the Trojans close out their season the following week against Lee County at Jardine Stadium.