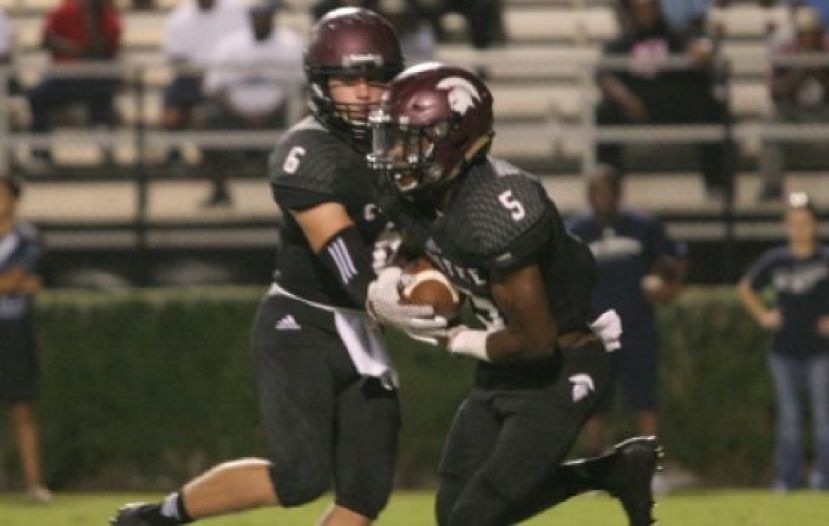 Robert Preston, Jr./DouglasNow.com Demetrius Davis, seen here taking a hand-off from quarterback Max Hughes against Tift County, put the nail in the Houston County Bears' proverbial coffin Friday night when he scored from 54 yards out late in the fourth quarter. A fumble forced by Derick Newton and recovered by Jameion Gaskins set up the touchdown.

Historically, the Coffee Trojans don’t play well during holiday weeks. If the kids don’t go to school on Friday, the team typically doesn’t play well. As has been the case for many years, a loss often results. (A notable exception is the South Effingham game two years ago; the Trojans won but a 4-6 South Effingham team put up its second-highest point total of the year against Coffee and gave the Trojans a big scare.)

Given the fact that the Coffee County School System had called off school not for one day but three days – Thursday, Friday, and the following Monday – during a game week, I was very nervous heading into Friday’s contest against the Houston County Bears at Jardine Stadium. It didn’t help that the Bears were led by All-Everything quarterback Jake Fromme. The Bears, who were picked by many to win the region this year, lost in spectacular fashion to Lee County the week before. They were hungry for revenge. We didn’t go to school two days prior to the game and weren’t going back until the next Tuesday.

It was a recipe for disaster.

And disastrous it was – for the Houston County Bears. For the second week in a row, an opponent shocked the Bears and handed them a loss. This time, despite an incredible second half by Fromme, the Trojan offense took advantage of a lackluster Houston defense while the defense forced a timely turnover late in the game that ultimately led to a Coffee victory in its first region game of the year.

After leading 13-0 at the half, Coffee escaped with a 42-35 win and made a strong case for a playoff spot with three games remaining. The Trojans are 5-2 on the season and 1-0 in region play.

Coffee held Houston scoreless in the first half. The Trojans put up 13 points on a long touchdown run by Demetrius Davis and a pair of field goals – 35 yards and 29 yards – to take a solid but far from comfortable lead into halftime.

The Trojans got the ball first to open the third quarter. Max Hughes and the Coffee offense made a strong statement by marching 67 yards and scoring on a 13-yard pass from Hughes to Davis to take a 20-0 lead. Then Fromme went to work. He led the Bears 70 yards for their first score of the night. Not to be outdone, Coffee scored on its ensuing possession to go ahead 27-7 with 3:20 in the third quarter. Houston put up seven more points to close out the third quarter. Heading into the final period, Coffee held on to an ever-shrinking 27-14 advantage.

The Trojans opened the fourth quarter with a nice drive that ended with a 37-yard touchdown run by Davis. Just a few seconds into the fourth, Coffee was up 34-14. Fromme led the Bears on two more scoring drives (with a Coffee punt sandwiched in between) to narrow the gap to 34-28 with 5:35 remaining in the game.

Houston had the momentum and it appeared as though the stage was being set for a Fromme-led fourth-quarter comeback. It didn’t help that on their fifth possession of the half, the Trojans punted. Houston took over on a short field with the clock running out. The Coffee defense had played well all game but you could sense they were starting to lose their grip.

But they weren’t done yet.

With the Bears licking their chops at the prospect of finally taking a lead that would have likely squashed Coffee’s chances of a victory, Derick Newton delivered a bone-jarring hit on a Houston ball carrier that knocked the ball loose. Jameion Gaskins fell on the ball and saved the game for the Trojans. Moments later, Davis ripped off a 54-yard touchdown run. Hughes and company went for two. He connected to Dalrone Donaldson to give the Trojans a comfortable 42-28 lead with under two minutes remaining.

The Bears still weren’t through. Fromme led another scoring drive, this one capped by a short quarterback keeper that brought Houston within a touchdown with 59 seconds remaining. They tried an onside kick – their third of the half – but Coffee recovered and ran out the clock for a big region win.

The Trojans now sit atop the region standings with the Valdosta Wildcats, who are also 1-0 in region play. Coffee is on the road the next two weeks against Northside-Warner Robins and Valdosta before returning to Jardine Stadium to finish the regular season against the Lee County Trojans.

- Brandon Miller contributed to this report.