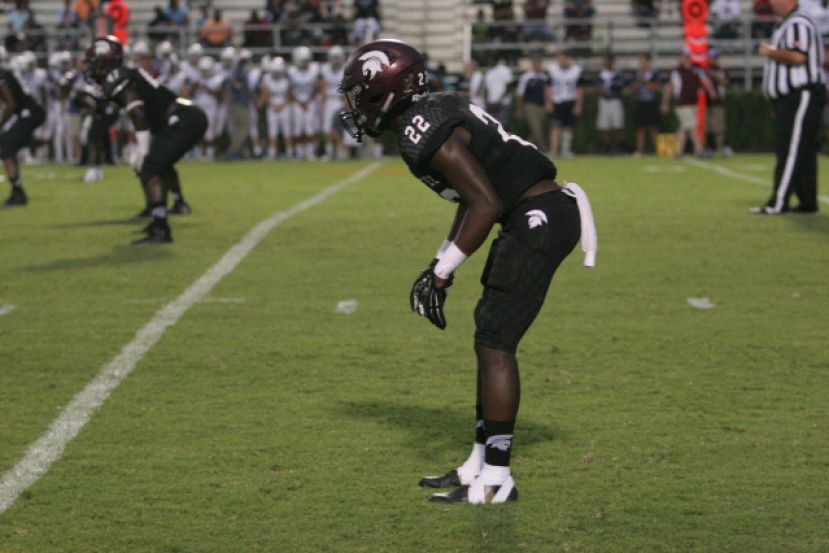 Robert Preston, Jr./DouglasNow.com Coffee defensive back Marquavious Jefferson intercepted a Tift pass in the end zone and returned it 100 yards for a touchdown Friday night. It was one of the few highlights Coffee had in the 31-20 loss to the Blue Devils.

It may be more frustrating to lose a game that you had a legitimate chance to win than it is to simply get blown out. The Coffee Trojans had one of those games Friday night against the Region 1-7A Tift County Blue Devils. Tift and Coffee squared off for the first time in three years at Jardine Stadium, and the Blue Devils left town with a 31-20 win.

The Trojans never led at all in the game but they definitely had their chances. Turnovers and penalties stalled any progress Coffee made and kept the Trojans on their heels all night. The Blue Devils – a big, fast, and talented team – made the most of the opportunities Coffee gave them and capitalized when they needed to. The result was a game that looked more lopsided than it actually was. It also demonstrated that the Trojans still have some wrinkles to iron out before the region schedule starts on Oct. 14.

Tift took the opening kick and the Coffee defense held. The Blue Devils punted and Trojan return man Jarquavious Jefferson sliced his way through the Tift coverage team for a nice run. But he coughed up the ball and the Blue Devils recovered at the Coffee 40. It didn’t take long for Tift to find the end zone and take a 7-0 lead. The Trojans launched a solid drive on their first possession that stalled around midfield on fourth and short. Head coach Robby Pruitt called a fake punt that worked like a charm – almost. Undray Heller, normally a defensive lineman, took the snap and rumbled near the Tift 25 for what should have been a first down and a great chance to tie the game. A holding call negated the run and Coffee had to punt.

Quarterback Max Hughes, who also handled the punting duties Friday, backed up the Blue Devils to their own 14. Undaunted, Tift marched down the field and scored again. With 2:05 left in the first quarter, the Blue Devils were up 14-0. They added a field goal with 4:22 to go in the first half to take a commanding 17-0 advantage.

Not to be outdone – and desperately needing to get on the scoreboard before halftime – the Trojans set off on an 80-yard drive of their own, which ended with a 48-yard touchdown pass from Hughes to Milton Jackson. Coffee trailed 17-7 with just under four minutes remaining in the first half. The Trojan defense held Tift and, late in the second quarter, Coffee got the ball back with a chance to narrow the gap even more. Hughes and company were moving the ball until a Tift defender picked off a pass to halt the Trojans’ advance on the end zone. The Blue Devils ran out the clock and took a 17-7 lead into halftime.

The third quarter opened with what is the Trojans’ play of the year thus far. Coffee received the opening kick of the half but had to punt. Tift got the ball in good field position and headed toward what appeared to be another touchdown. But Marquavious Jefferson intercepted a pass in the end zone and returned it 100 yards for a score. Early in the third quarter, the Trojans were in striking distance; they trailed 17-14.

Unfortunately, that’s as close as they would get.

On Coffee’s second possession of the half, Tift intercepted another pass and drove 58 yards for another touchdown. With 11:53 in the fourth quarter, the Blue Devils were up 24-14. Tift added another touchdown to take a 31-14 lead. Coffee answered late in the game when Hughes hit Adam Solomon for a seven-yard touchdown. A missed extra point left the score 31-20, which would stand for the remainder of the game.

The Trojans are now 3-2 on the season and have one more non-region contest before getting into region play. Next Friday, the Warner Robins Demons come to Douglas for a 7:30 start. Coffee will then get a one-week respite before playing its first region game – against Houston County at Jardine Stadium.

More in this category: « Former Trojan named to Georgia Southern Athletics Hall of Fame Trojans take to the air to defeat Warner Robins Demons 56-22 on Homecoming »
Login to post comments