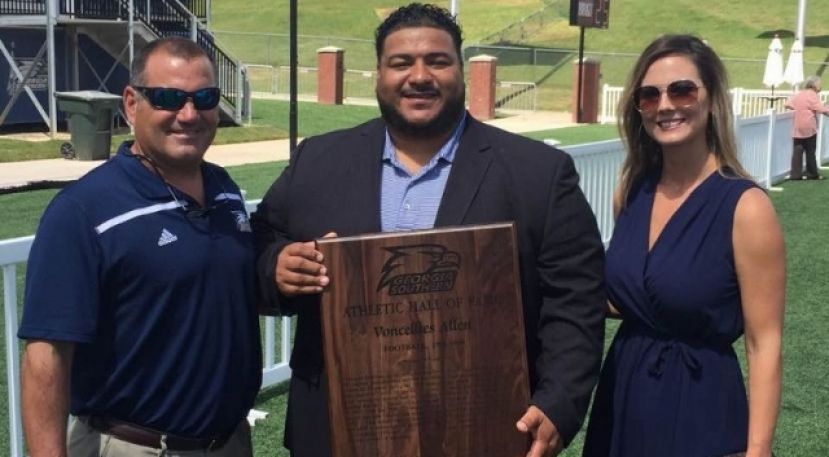 Photo courtesy of Voncellies Allen's Facebook page Voncellies Allen (center) is now a member of the Georgia Southern University Athletics Hall of Fame. Allen, a former Coffee Trojan, won a national championship with the Eagles in 1999.

Voncellies Allen, a former Coffee Trojan, is now a member of the Georgia Southern Athletics Hall of Fame. GSU inducted Allen on Saturday, Sept. 17, in Statesboro.

Allen played just one year of football at Coffee High. He was good enough in that one season to receive several scholarship offers. Allen decided to attend Georgia Southern University, where he lettered for four years as a defensive lineman. He started 45 games, including all 15 of the 1999 national championship season. According to release from Georgia Southern, Allen recorded 77 total tackles, 30 tackles for a loss, 3.5 sacks, and had one interception that season.

Allen also earned All-America and All-Southern Conference honors from 1997-1999. In 1999, he was also named First-Team Associated Press All-America and was an All-SoCon selection in 1999 by both the coaches and the media. Additionally, Georgia Southern named Allen Student-Athlete of the Year in 1998 and 1999.

After his career ended at GSU, Allen played for several different arena football teams. He now lives in Augusta with his wife and children.