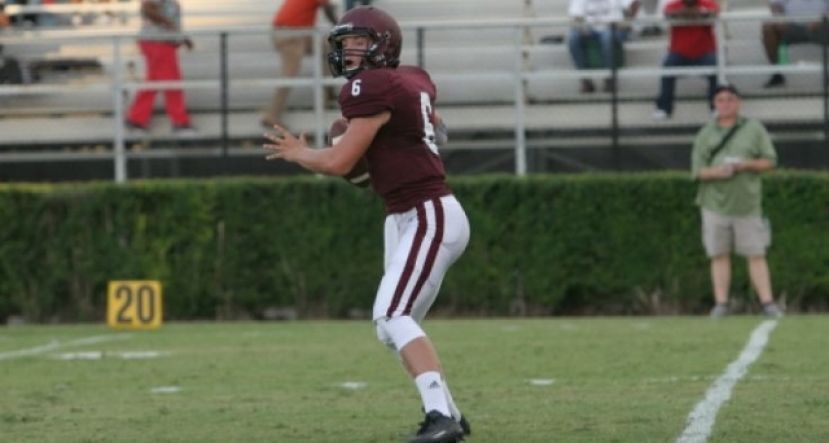 The Coffee Trojans extended their winning streak at Georgia Southern University to three in a row Friday night with a convincing 41-13 win over the Effingham County Rebels in the Erk Russell Classic, the venue at which the Trojans have chosen to open their season since 2014. The Coffee offense sputtered a bit in the first half but the Trojans picked things up in the third and fourth quarters and outscored the Rebels 21-0 in the second half as they cruised to victory.

Senior running back Demetri us Davis scored three touchdowns (18 yards, 45 yards, and two yards) and senior quarterback Max Hughes threw two touchdown passes – one to junior Jarquavious Jefferson (10 yards) and the other to junior Dalrone Donaldson (12 yards). The other Jefferson, Marquavious, found the end zone on Coffee’s most spectacular play of the night, a 70-yard pick six early in the second quarter.

Coffee opened the game with a 70-yard drive that ended with Davis’s first touchdown of the night. A 29-yard pass from Hughes to R.J. Ringgold set up the Davis score. Neither the Trojans nor the Rebels did much over their next two possessions. Effingham seemed to find its stride and was moving the ball late in the first quarter and early in the second quarter when an ill-placed Rebel pass ended up in the hands of Marquavious Jefferson, who took the interception nearly the length of the field for a Coffee score. On the Trojans’ next possession, Effingham’s Darius Garvin blocked a Hughes punt. Demonte Lee picked up the loose ball and ran it in for the Rebels’ first touchdown of the night. The Rebels’ female placekicker, McKenzie Stewart, was a little off with her aim on the point after. However, Effingham had narrowed the Trojans’ advantage to 13-6 with 7:14 left in the second quarter.

Coffee responded with a 75-yard drive that ended with Hughes finding Jarquavious Jefferson, Marquavious’s twin brother, in the end zone for a 10-yard touchdown pass. After a successful extra point, Coffee had a 20-6 lead with 2:12 left in the half. Effingham wasn’t ready to quit just yet and put seven more points on the board with 20 seconds left in the quarter. The Trojans took a slim 20-13 lead into halftime. “We’re making too many mistakes. We’ve got to pick up on the hand signals from the sidelines better on offense and we can’t make any more mistakes. This is a good team and we can’t let them stay in the game,” said head coach Robby Pruitt after halftime.

His team heeded his advice in the second half. Coffee kept Effingham out of the end zone and added three more touchdowns – two by Davis and the pass from Hughes to Donaldson – to seal the 41-13 win.

The Trojans are on the road next week against Brunswick. The play one more away game on Sept. 2 in Waycross against Ware County before playing four straight home games at Jardine Stadium.

More in this category: « Colquitt wins preseason scrimmage 21-20 over Coffee (with video) Despite poor play, Trojans defeat Brunswick Pirates by one »
Login to post comments