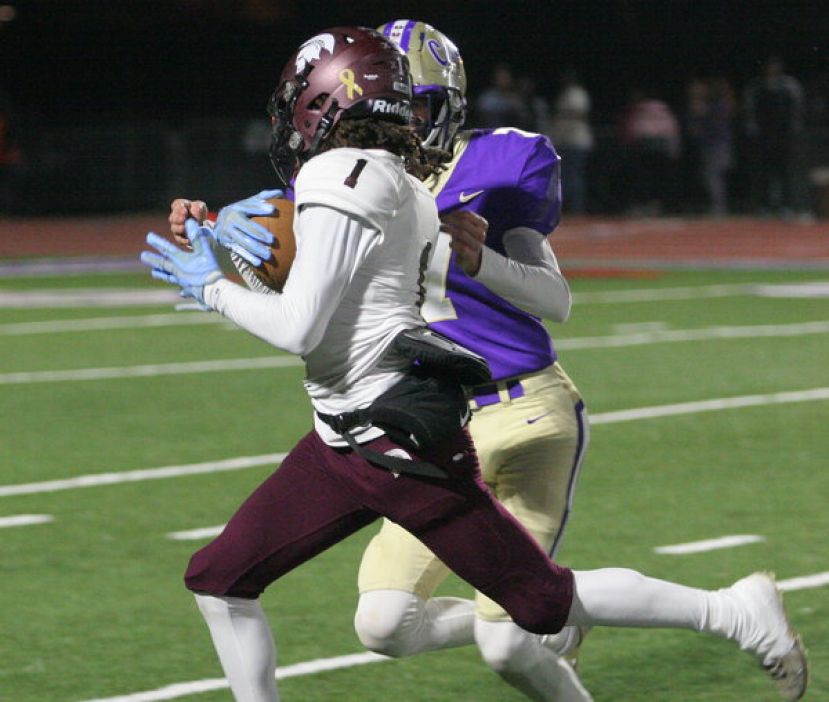 Robert Preston Jr./DouglasNow.com Cartersville kicker Ryan Johnson brings down Coffee kick returner Pat McCall in the third quarter of the Trojans' 56-28 loss to the Purple Hurricanes. McCall's return would set up a touchdown by Fred Brown a few plays later.

For the second time in three years, Cartersville ended Coffee’s season, this time with a dominating 56-28 win that sets up a semifinal matchup against the Warner Robins Demons. Warner Robins defeated Creekside with a field goal in overtime on Friday.

“We just came out real uptight. The first dang two drives of the game and we’re down 14-0 and it just kind of snowballed in the first half. I thought we kept fighting and then at halftime I just challenged them. I told them there are going to be times in your life where you’re down 42-14 and you’ve got one of two choices: You can lay down and quit or you can show people who you truly are. I couldn’t be prouder of our second half. This is all a learning experience and I’m looking forward to being here a whole offseason,” said head coach Mike Coe following the game.

The Trojans got behind early and couldn’t find an antidote for a Purple Hurricanes team that did it all in the first half. With just over three minutes left in the first quarter, the ‘Canes were up 21-0 and very much in control. Early in the second quarter, Coffee got on the board when quarterback Maurice Hansley dove into the end zone from the one yard line.

Undaunted, Cartersville responded immediately when quarterback Paul Gamble (who ran for three touchdowns and threw for three more) found receiver Collin Fletcher for a 45-yard touchdown. The Purple Hurricanes scored two more times in the first half — on a 12-yard run by Khristian Lando and a four-yard run by Gamble.

Coffee running back Antwain McDuffie scored the Trojans’ second touchdown of the night with 15 seconds left in the first half. The two teams went into halftime with Cartersville leading 42-14.

The second half was a different story. Coffee played like a renewed team, allowing just one offensive touchdown. However, the damage had been done. While the Trojans had opportunities, turnovers, penalties, and other miscues kept Coffee from sustaining any momentum.

It didn’t take long for the ‘Canes to score when the third quarter opened. Fletcher, who played both ways, made it into the Coffee backfield and grabbed a mishandled pitch. He ran into the end zone to put Cartersville ahead 49-12.

On the ensuing kick, returner Pat McCall found a seam and nearly scored. He made it to the Cartersville 12 before kicker Ryan Johnson brought him down. A couple of plays later, Fred Brown scored from three yards out. With 4:10 left in the third quarter, Cartersville was up 49-14.

And that’s as close as the Trojans would get.

Despite opportunities to score at least two more times, Coffee couldn’t find the end zone. Cartersville’s Lando scored one more time with 1:03 left in the game to make the final 56-28.

The Trojans end the season with a 10-3 record in Coach Coe’s first season. The Purple Hurricanes will head south to Warner Robins next week for a semifinal contest with Warner Robins, which has made the semis for the sixth straight year.