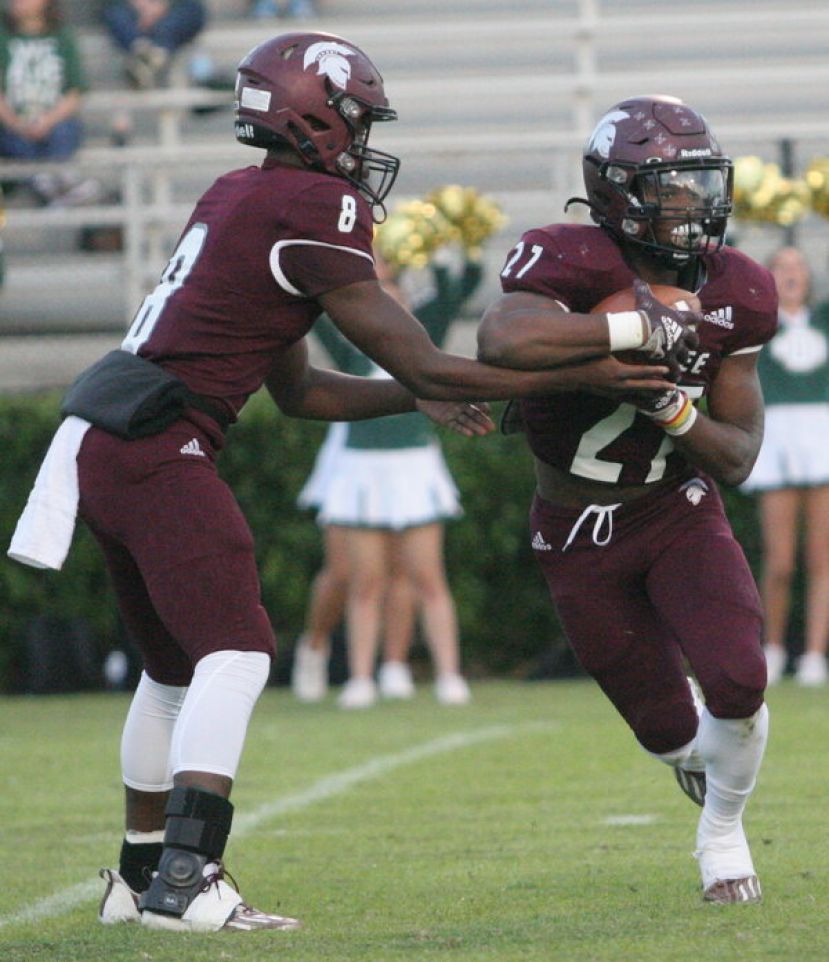 Robert Preston Jr./DouglasNow.com Sophomore running back Tyrese Woodgett takes the ball from junior quarterback Maurice Hansley as he breaks an 80-yard touchdown for the first score of the Trojans' game against the Ola Mustangs in the first round of the playoffs. The Trojans won 34-6.

“The key is to punch your ticket ‘cause you never know who may get hurt on the other team, who may get upset, who can’t play in the rain, who can’t play in the cold. So you just keep plugging and trying to get better and surviving and advancing and keep moving forward. I’m glad I’ve got one more week with my guys,” said Coffee Trojans head coach Mike Coe following Coffee’s 34-6 win over the visiting Ola Mustangs Saturday night at Jardine Stadium.

The #2 seed Trojans faced the #3 seed Mustangs in the first round of the state playoffs. Coffee came into the game with an 8-2 record; Ola’s was 6-4. Both teams were coming off losses to end the season — Coffee to Ware and Ola to Dutchtown (Hampton).

The game kicked off at the unusual time of 5 p.m.; even with the recent time change, it was still very much daylight when the contest began. The Mustangs took the ball first and promptly marched down the field, racking up big plays along the way. However, their drive stalled at the eight yard line and they opted to attempt a field goal. The Trojans blocked the attempt and kept Ola off the scoreboard.

The Mustangs controlled the entire first quarter; Coffee only had one possession in the opening quarter and it ended with a punt.

The second quarter was a different story. A little over four minutes in, sophomore running back Tyrese Woodgett broke an 80-yard run for the first score of the game. Coffee held Ola through the rest of the period and added another touchdown with 53 seconds left in the half, this one an 11-yard scamper by senior running back Antwain McDuffie. As the half drew to a close, Coffee had a 14-0 lead.

The third quarter was a stalemate for the first eight minutes. Then the Trojans struck again. Quarterback Maurice Hansley found receiver Billy Simpson for a 23-yard score. With 4:09 left in the third quarter, Coffee held a comfortable 21-0 lead. The Mustangs ended the shutout when running back Brian Dalton scored from 31 yards. The extra point missed but the score cut the Trojans’ advantage to 21-6. On the final play of the third quarter, Coffee running back Fred Brown found the end zone on a 14-yard run to put the Trojans up 28-6. Early in the fourth quarter, Hansley hit Keshad Turner for a 65-yard touchdown pass. The point-after was no good but Coffee still held an insurmountable 34-6 lead.

“It’s going to fun. It’s going to be fun. All I know is I get to be with my guys one more week,” said Coach Coe.

The Trojans will travel to Decatur next week to face the #1 seed Decatur Bulldogs in the second round. The game will take place on Friday at 7:30 p.m.