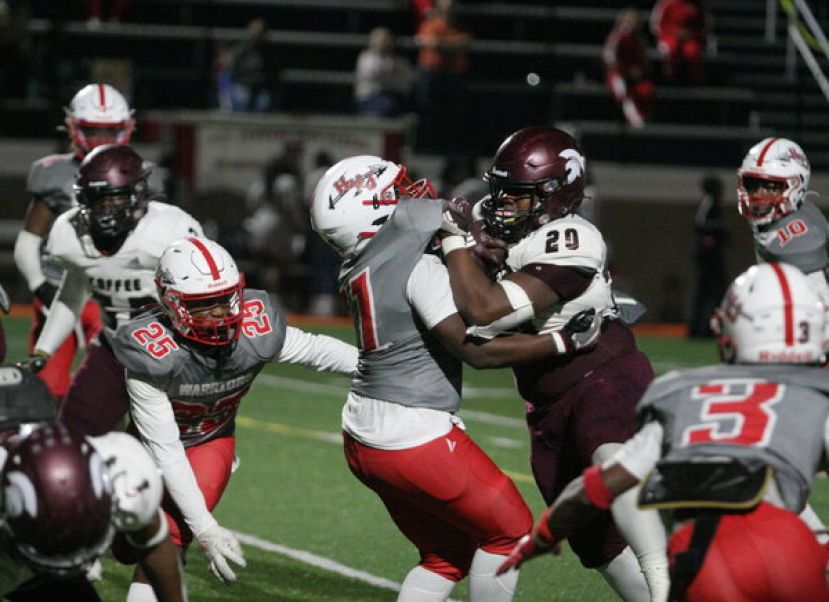 Junior running back Fred Brown ran for two touchdowns and quarterback Maurice Hansley threw for two more in the Coffee Trojans 42-7 win over the Jenkins Warriors Thursday night in Savannah. The win improved Coffee to 7-1 overall and 3-0 in region play. The Trojans, who have two games remaining, secured a playoff spot with the win.

It was another methodical and business-like game for Coffee. The Trojans had one minor hiccup, a fumbled punt early in the first quarter that didn’t cost Coffee any points. Other than that, the Trojan offense used a balanced attack to demonstrate once again why they’re number one in the state. The defense did what it’s done all season — smothered its opponent with a fast, physical attack that, save for one third-quarter drive, kept the opposing offense out of the end zone.

After the fumbled punt, the Coffee defense forced Jenkins to punt again. Then, with the ball on the Coffee 26, Tyrese Woodgett broke free for a 76 yard touchdown run to give the Trojans a 7-0 lead. About two minutes later, Fred Brown rumbled 26 yards for another Coffee touchdown. Early in the second quarter, Antwain McDuffie found the end zone from six yards out. The Trojans lined up to kick the extra point but holder Bray Coe, Coffee’s back-up quarterback, ran a fake. He jumped up with the ball and threw a pass to Range Robinson for two points. With 9:08 left in the first half, the Trojans were up 22-0.

Coffee capped the second quarter with a pair of long touchdown passes from Hansley. Billy Simpson caught the first one, Tyriq Edwards brought in the second. The point-after attempt on Edwards’ touchdown took a strange turn. James Jarrard, who has been handling the kicking duties for the last several games, made the extra point. However, officials threw a flag on Jenkins for jumping offsides. The Trojans declined the penalty and lined up for another kick. This time, a Jenkins lineman flew into the backfield well before the snap. Inexplicably, no one threw a flag. Jarrard attempted the kick, which the offending lineman easily blocked. Coffee’s coaching staff was livid with the no call. The missed extra point did not affect the game; it did, however, spoil Jarrard’s perfect point-after record. Until that kick, he was 12-12 on extra points since taking over for the injured Jonah Saylor.

As the first half expired, the Trojans had a comfortable 35-0 lead.

The Warriors scored the only third quarter touchdown. They were able to keep the Coffee defense on its heels for one drive and ruined the shutout. Coffee bounced back in the fourth quarter when Brown scored his second touchdown of the night with 8:28 left in the game.

“We’re going to put this behind us and get ready for Greenbrier next week. We’ve got to get better. This wasn’t our best game. The goal is the region championship but we’ve got to take it one day at a the time, one week at a time. I was proud of our kids creating their own juice tonight. You could tell it was a Thursday night. There was no music playing. I thought they came out in the first half, asserted themselves and imposed their will. That’s what we have to do,” said head coach Mike Coe following the game.

Coffee will travel to Evans to face Greenbrier next Friday night for a 7:30 kickoff. Greenbrier (0-7) squares off against undefeated Ware County tonight. Coffee and Ware appear on a collision course for what could be the region championship game at Jardine Stadium on November 4.