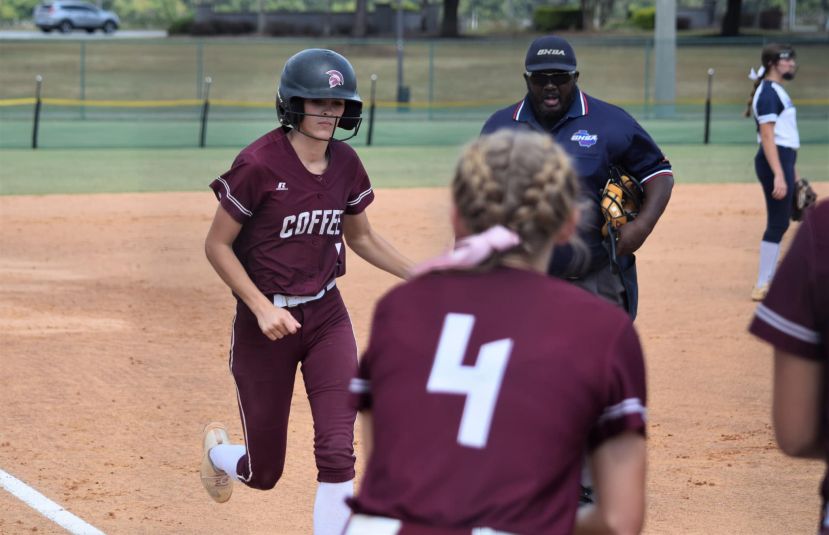 Photo courtesy of Coffee Softball Hannah Capps crosses home plate after hitting a home run on the second day of the region tournament. The Lady Trojans are headed to Jones County for the first round of the state playoffs.

The Lady Trojans wrapped up the regular season at 18-9 and are headed to Gray to play Jones County in the first round of the GHSA state tournament.

Coffee lost Game 1 to Greenbrier 2-0 and only managed 2 hits. Imani Paulk and Ella Winters picked up the hits and Erin Robinson scattered 5 hits and struck out 10 in the loss. Robinson did not allow an earned run through 7 innings and took a tough loss.

In game 2 the Lady Trojans bounced back with a 13-o shutout against Bradwell Institute. Hannah Capps, Hanna Hutchison, Morgan Hodges, and Kaci Thacker picked up a pair of hits in the blowout. Aunaleyce Carter, Imani Paulk, Erin Robinson, Brylee Gamage, Morgan Adams, Ella Winters, and Ansley Day all added a hit. Brylee Gamage picked up the win with 3 innings of scoreless work.

In the final game of the season Statesboro knocked off the Lady Trojans 6-1. Coffee managed only 5 hits including 2 by Morgan Adams. Robinson only allowed 3 earned runs in the game and took the loss.

"We played our worst game of the year after beating the Blue Devils badly in two previous games. We were a little sloppy on defense but that happens occasionally. We'll bounce back in the state tournament because this team always does. I feel good about our chances,” said head coach Stan Hughes.