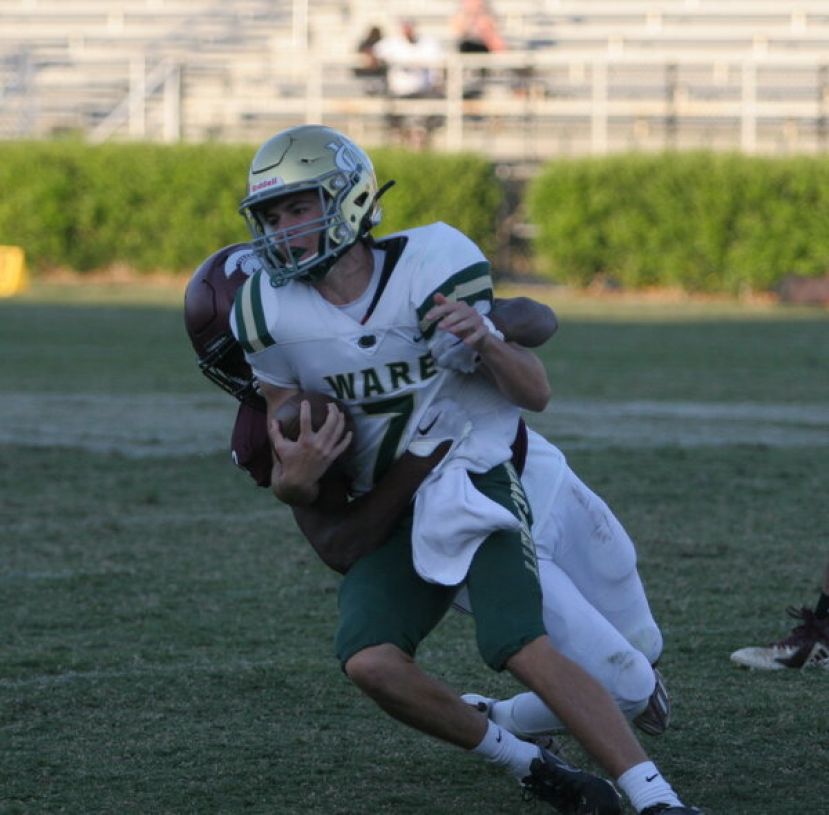 Robert Preston Jr./DouglasNow.com Jyarius Carter, a sophomore linebacker, brings down a Ware County ball carrier in the Trojans' 12-7 loss to the Gators Thursday at Jardine Stadium.

The Coffee Trojans junior varsity squad found themselves in an unenviable position Thursday afternoon at Jardine Stadium. The Trojans forced six Ware County Gators (JV) turnovers but could muster only one touchdown. When the final seconds ticked off the clock, the Gators celebrated a 12-7 win over their rivals while the Trojans looked stunned at the outcome.

Ware received the opening kick and, after a good return, scored on the first play from scrimmage. The point-after was no good, giving the Gators an early 6-0 lead. The Coffee defense stiffened after that and kept Ware out of the end zone until the middle of the second quarter. The Gators went for two in an attempt to get the score to 14 but Chris Reed intercepted the pass in the end zone to thwart another Ware County extra point. With 6:54 left in the second quarter, Ware led 14-0.

A minute and a half later, Coffee quarterback Bray Coe connected with receiver James Jarrard for a long touchdown that narrowed Ware’s advantage to 12-7.

And that was the last time either team scored.

The defenses punished each other through the next two and a half quarters. Coffee stopped drive after drive after drive by forcing turnovers — interceptions, fumbles, dropped punts. Mykevius Smith had three takeaways on his own — a pair of interceptions and a muffed punt recovery. Yet every time the Trojans took the ball, Ware snuffed any momentum Coffee may have gained. Coe was on the run all afternoon when he attempted to throw. No one in the Coffee stable of  running backs could find any running room. Even a second-half drive that saw the Trojans pick up 30 yards in penalties and in great field position ended with no points.

After Ware stopped the final Coffee drive on downs with just over a minute to go, the Trojans could only watch as the seconds ticked away. Ware escaped with a bruising and, at times, sloppy 12-7 win.

The Coffee JV will be back in action next Thursday at 5 p.m. in Fitzgerald. The varsity Trojans take the field tonight in Hinesville against Bradwell Institute at 7:30 p.m.