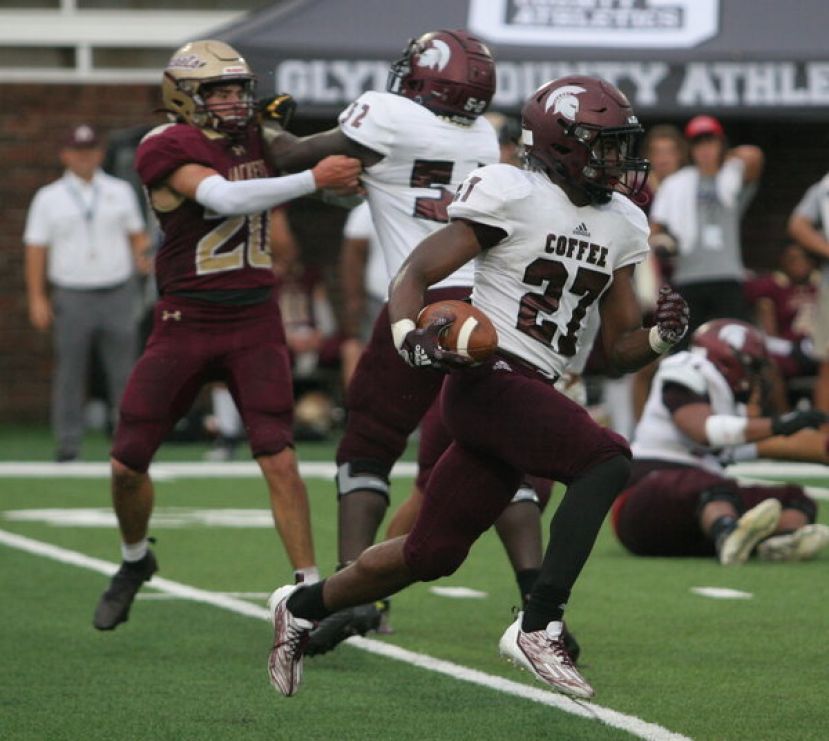 Robert Preston Jr./DouglasNow.com Sophomore running back Tyrese Woodgett looks for yards after reversing the field on a carry against the St. Augustine (Fla.) Yellow Jackets in the Border Classic Saturday night.

The Coffee Trojans battled a two-week layoff thanks to a bye week and a 2:15 weather delay en route to a 34-14 win over the St. Augustine (Fla.) Yellow Jackets in the first ever Border Classic Saturday afternoon in Brunswick. Hosted by Glynn Academy, the Border Classic began Thursday night and featured seven games between teams from South Georgia and North Florida.

Coffee’s game was the sixth on the schedule and kicked off at 4 p.m. Saturday. If you were watching the weather on Saturday you know the rest of the story — it wasn’t a matter of if there would be a weather delay, it was when.

The “when” came at the end of the first quarter almost immediately after the Trojans scored their first touchdown of the day. With 2:56 left in the quarter, quarterback Maurice Hansley scampered six yards into the end zone. The point after was good, giving the Trojans a 7-0 lead. As both teams were running out on the field for the kickoff, officials stopped the players and sent them into the locker rooms. Lightning had been detected and officials suspended play. Before long, rain joined the lightning and kept the players inside for over two hours.

When play resumed, the Trojans picked up where they left off. After holding the Yellow Jackets, Coffee launched a drive that ended with a 35-yard Antwan McDuffie touchdown. Early in the second quarter, sophomore running back Tyrese Woodgett scored on a 29-yard run to give the Trojans a 21-0 lead.

St. Augustine added a score late in the second. Coffee blocked the point-after and the two teams went into halftime with the Trojans leading 21-6.

McDuffie scored again in the third quarter. And with 4:02 left in the game, Hansley connected with Keyshad Turner for a 27-yard touchdown pass. The score put the Trojans up 34-14 and that was the score when the final seconds ticked off the clock.

“Man, that was a long two weeks. I’m glad we get to play next Friday. We’re going to celebrate this one. This one was very, very physical. I know our players are going to be very sore. Really proud of them, proud of our coaching staff. I’m proud of their response after losing to Bainbridge. I think we’re relatively healthy and we’ve got to keep getting better,” said head coach Mike Coe after the game.

The Trojans are now 2-1 on the season. Next week, Salem comes to Jardine Stadium for the first home game of the year. The following week, Coffee faces Richmond Hill for Homecoming.