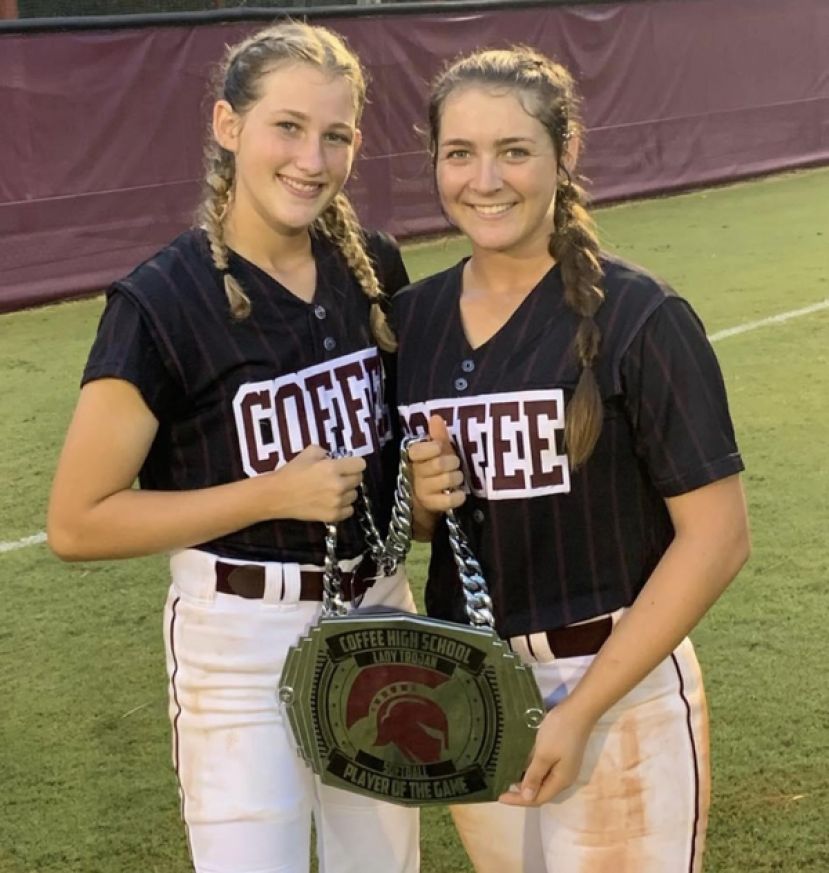 The Lady Trojans opened the 2022 regular season on the road and dropped a pair of games to Brantley County and Jeff Davis 1-0 and 3-1 respectively.

Sophomore Erin Robinson took a no-hitter into the 7th before giving up a couple hits to the Herons with 8 strikeouts. Hannah Capps and Imani Paulk had the only hits for Coffee.

The next night the Lady Trojans dropped another low-scoring game to Jeff Davis 3-1 behind another strong pitching performance by freshman Karlee Thomas. Thomas scattered 7 hits and Hannah Capps picked up 2 more hits including a double. Imani Paulk, Imori Paulk, Morgan Hodges, and Hannah Hutchison all chipped in a hit but Coffee came up short.

"In both games we had a hard time squaring balls up and wasted a couple well-pitched games. Our defense was really good in both too but it happens that way some times,” stated head coach Stan Hughes.

The Lady Trojans got on track Thursday night as 7A opponent Camden County came to  town before a huge crowd at Faircloth. The bats woke up with 13 hits including a long homer by senior Morgan Hodges. Hodges added 2 more hits and Hannah Capps also had 3 to pace the Trojans. Kaci Thacker and Imori Paulk had 2 hits and Imani Paulk, Erin Robinson, and Hanna Hutchison added 1 each against Camden pitching.

Erin Robinson's second start of the year was brilliant as she struck out 11 without a walk and only 1 earned run. "It was great to get our first win especially at home, they really came to play,” said Coach  Hughes.

Coffee traveled to Alma Saturday for 2 games against Bacon and Charlton counties. In the first game the Lady Trojans pounded the softball including 3 hits by senior Imani Paulk. Hannah Capps, Kaci Thacker, Erin Robinson, and Hanna Hutchison had 2 hits apiece while Morgan Hodges and Ella Winters added 1 each.

The big story in game 1 was Erin Robinson as she broke a school record striking out 20 of the 21 outs without a walk and shut out the Lady Raiders."It was an incredible thing to watch and there was never a threat. Erin was locked in and when that happens the other team is in trouble,” said Coach Hughes.

The Lady Trojans won their 3rd in a row knocking off Charlton 4-1 with 4 people sharing the circle. Karlee Thomas, Erin Robinson, Brylee Gamage, and Emme Cole allowed only 3 hits and Erin struck out 6 Lady Indians. "It was a team effort by our pitching staff and we were able to get everyone a little work,” said Coach Hughes.

The bats were still hot as Imori Paulk and Hannah Capps had 2 hits to lead the way. Morgan Hodges, Imani Paulk, Kaci thacker, Hanna Hutchison, and Ella Winters added a hit apiece in the win. “Three in a row made us feel pretty good and this team really plays hard. It's gonna be a fun year from the looks of the first week and we're excited as a staff,” stated Coach Hughes.

The Lady Trojans will travel to Telfair Tuesday for a JV/Varsity double header and the JV tournament will take place Saturday at Greg Walker Complex.