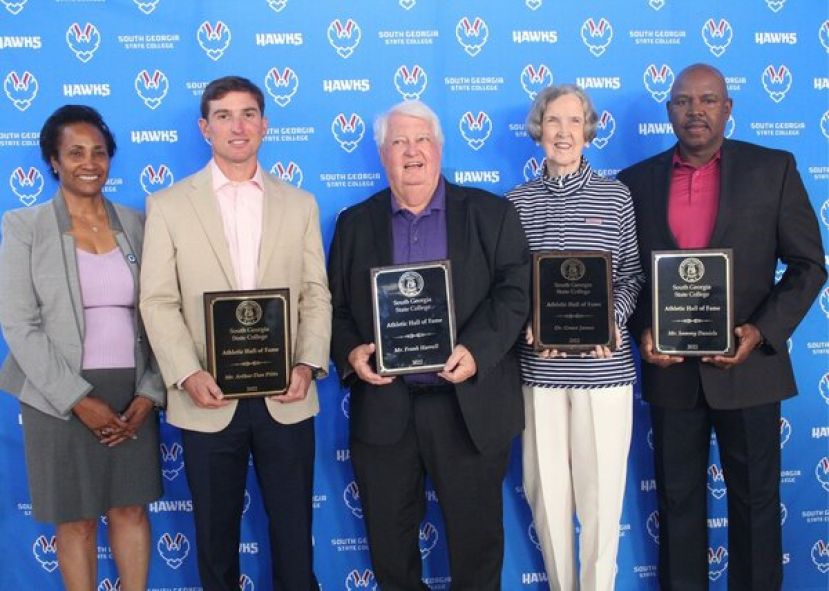 The South Georgia State College (SGSC) Athletic Hall of Fame inducted five new members at an awards ceremony and dinner held on June 2, 2022, in the SGSC Clower Center. The event was held to recognize the newest class of Hall of Fame inductees that have made athletic contributions to the College.

Dr. Greg Tanner, vice president for advancement, government relations and athletics, opened the evening with a welcome and extended special appreciation to the alumni for making this special night possible. He shared that the setting of the ceremony was being held in the Clower Center, previously the old gym which was built in 1939 and named in honor of Thomas Alvin Clower, a South Georgia professor of education. Many of the inductees and guests recall time spent in the gym over the years. The invocation was given by Dr. Jim Cottingham, president for the SGSC Foundation, followed by dinner.

In her remarks, Dr. Ingrid Thompson-Sellers, SGSC president, expressed appreciation for those in attendance at this gathering that celebrates “the athletic heritage and contributions to our institution’s legacy.” Dr. Thompson-Sellers highlighted examples of past and current students who have succeeded academically and athletically during their time at South Georgia, both on the Waycross and Douglas campuses. “Students who choose to participate in organized, competitive sports while enrolled full time at South Georgia State College, usually demonstrate a high level of commitment, tenacity and collegiality which translate into academic success as well,” shared Dr. Thompson-Sellers. “They become leaders in their community and continue to practice the skills which they learn as student-athletes as evidenced by the caliber of inductees this year."

With more than 60 alumni, faculty, coaches, staff, friends and family members in attendance, the ranks of SGSC’s Hall of Fame grew to include individuals in the field of intercollegiate athletics spanning almost seven decades. The 2022 inductees are listed below.

Coach Arthur Dan Pitts graduated from Lincolnton High School where he played for the Red Devils. During his senior year, he was named All State quarterback. His athletic ability earned him a scholarship in 1951- 1952 to play at what was then South Georgia College. In 1959, Coach Pitts began coaching at Mary Persons High School, where he remained for his entire career. Under his leadership for 39 years at Mary Persons, his teams compiled 346 wins, 109 losses and 4 ties. The Bulldogs won 15 region championships, made four appearances in the state finals, winning the AA state championship with an undefeated season in 1980. In 1996, Coach Pitts became the winningest coach in Georgia high school history with 316 wins.

Coach Pitts passed away in April 2021. His family, including daughters Carolann Pitts Evans and Penny Pitts Mitchell, were in attendance to accept the award in his memory.

Coach Frank Harrell, a native of Berrien County, attended South Georgia College in 1968 to 1970. He played point guard for Coach Scotty Perkins. During his freshman year, the team won the state junior college championship. After graduating from Georgia Southwestern College in 1972, Coach Harrell began his coaching career at Ware County High School, then Cendar Grove High School, where he was selected as the Georgia High School Association Coach of the Year in 1976. Also, during that year, he was hired as the assistant coach at the University of Tennessee. In 1978, Coach Harrell became the men’s basketball coach and athletic director at the University of Virginia Wise. A few years later, he moved to Tennessee Technological University as associate head coach. During his time at Tennessee Tech, he was cited as one of the Top Ten Basketball Recruiters in America by Basketball Weekly. In 1989, Coach Harrell became the head coach at Tennessee Tech and was later named Coach of the Year by Tennessee sportswriters. In 2004, Coach Harrell was named Director of Athletics for Tennessee Tech. In 2021, Coach Harrell was selected to the Tennessee Technological University Sports Hall of Fame.

Sammy Daniels played high school baseball and football at Swainsboro High School from 1972 to 1976. He then attended South Georgia College and was a member of the 1978 Georgia Junior Collegiate Athletic Association State Championship Team. Mr. Daniels was named MVP in the 1978 State Tournament and in 1978, he received All-Conference Honors and named to the All-Tournament Team.

In 2018, Mr. Daniels was inducted into the Swainsboro High School Hall of Fame and then in 2021 he was inducted in the Columbus State University Hall of Fame. As a way to give back, Mr. Daniels is a member of the Student Organization for Black Unity, known as SOBU. For numerous years, SOBU members have funded a scholarship to sponsor a student at South Georgia State College. They are dedicated to helping students have a positive educational experience at SGSC, much like they did themselves.

After leaving Waycross College, Mr. Hosely played for Florida A&M University. While playing at FAMU, he led in scoring, assists and steals in several different games.

After graduating from Atkinson County High School, Dr. James began her college experience at Abraham Baldwin Agricultural College where she excelled in both academics and basketball. She completed her bachelor’s and master’s degrees at Georgia Southern and her doctorate at the University of Georgia.

During her four decades at South Georgia College, Dr. James taught, coached and advised thousands of students who benefited greatly from her kindness and wisdom. Among her service to the college, she was cheerleader sponsor, women’s basketball coach, softball coach, women’s intramural director and a committee member for discipline, curriculum and instruction, library, athletics, student affairs, faulty affairs, and tenure and promotion. She also served as chair and co-chair of the college’s self-study committee.

In 2004, South Georgia College President Dr Ed Jackson wrote, “Students, faculty, staff and members of the community love and respect Dr. James for her commitment, thoughtfulness, fairness, helpfulness, good judgement and strong set of values. The thousands who have passed through the doors of South Georgia College are better people because of the unselfish service rendered by Dr. Grace James.

To learn more about the athletic program or supporting student-athletes through need-based scholarships or other types of giving for the South Georgia State College Foundation, please contact Dr. Greg Tanner, vice president for advancement, government relations and athletics, by phone at 912-260-4259 or by email at This email address is being protected from spambots. You need JavaScript enabled to view it..