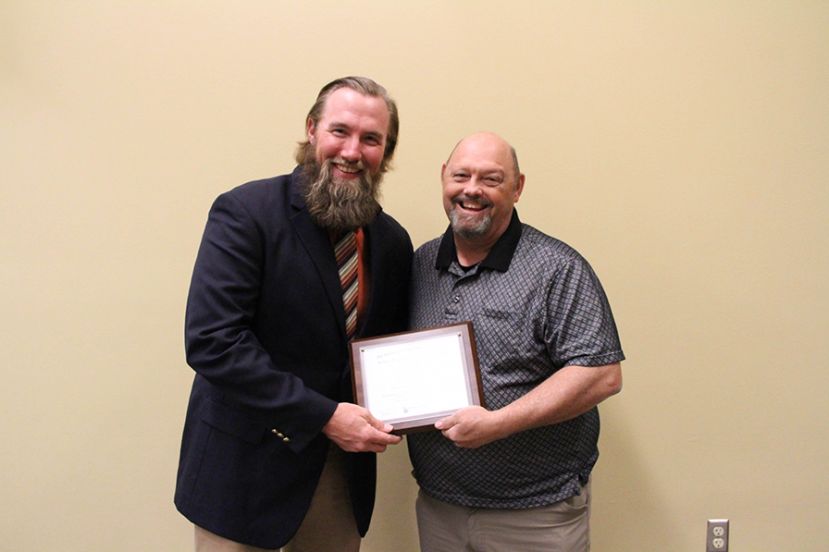 Submitted photo Wiregrass is proud to announce Ryan Degner, Welding and Joining Technology student, as the college’s 2022 GOAL Winner. He is pictured with his nominating instructor Roy Bramley.

Ryan Degner, a Welding and Joining Technology student on the Valdosta Campus, has been named the 2022 Georgia Occupational Award of Leadership (GOAL) winner for Wiregrass Georgia Technical College.  GOAL honors excellence in academics and leadership among the state’s technical college student and is a statewide program of the Technical College System of Georgia.  Local GOAL winners are selected at each of the state’s 22 technical colleges and one Board of Regents college with a technical education division.

Nominated by his Welding Instructor, Roy Bramley, Degner was first introduced to Welding while serving in the army.   While on deployment, he tried his hand at welding for the first time and said he would never forget when he struck his first arc.  “That spark was my new burning passion.  I still had four years until I retired, but I knew I was going to become a welder.”  Degner entered the Army immediately after graduating from high school and began his career as an Army Engineer.  During his time in the Army, he was able to serve as an engineer, recruiter, instructor, and drill sergeant.

After retiring in 2020 from the Army, he settled in Valdosta, began to focus on his future, and looked into welding programs in the area.  He found Wiregrass offered Welding and has one of the best Veteran’s Support Service Centers in the state.  “It was a perfect fit,” shared Degner.  He credits the Post-9/11 GI Bill for fully funding his education and the college’s Veterans Support Services Department for ensuring that he receives all the benefits available to him, as well as assistance with resume preparations, job placement, and other student services.  The College’s SkillsUSA Chapter's numerous gold medals at state and nation levels also impressed him.  He is now part of the Wiregrass SkillsUSA Chapter and will be participating in the Welding Sculpture competition.  “I’m being mentored by the Welding Sculpture 2021 State Gold Winner, who is a student here at Wiregrass also. The project I am working on for SkillsUSA in the sculpture competition is allowing me the opportunity to use every single skill I have learned in Welding,” shared Degner. After graduation, Degner plans to open his own business in South Georgia, which will focus on commercial and residential clients for esthetics and structural projects.

Degner competed against 37 nominees from Wiregrass’ four campuses in Valdosta, Douglas, Fitzgerald, and Sparks before being named as one of the top four nominees and college winner.  The runners-up were: Rhonda Dowdy, Early Childhood Care and Education on the Valdosta Campus; Monica McKenzie, Radiologic Technology on the Valdosta Campus; and Lea Williams, Welding and Joining Technology on the Coffee Campus.

Degner will now advance to regional competition in February. In April, he will learn if he is one of the nine state finalists at the State GOAL Awards ceremony in Atlanta.  A panel of business, industry, and government leaders will interview the finalists and choose one to be the 2022 State GOAL winner and recipient of the GOAL medallion. The grand prize includes a new car, courtesy of KIA, the statewide corporate sponsor of the GOAL program.

For more information about the Welding and Joining Technology program and other programs visit wiregrass.edu.  Spring Semester classes start January 10, 2021.