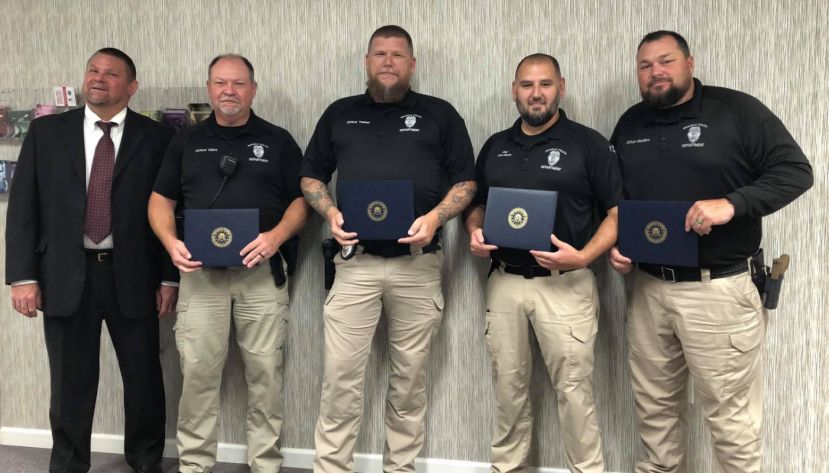 Submitted photo Officers from the Nicholls Police Department were recognized, along with a number of officers from other agencies, for their role in the Sandy Bottom investigation. From left: FBI RAC Will Clarke, Brad Cliett, Gene Tanner, Chief Jamie Merritt, and Austin Medders.

The Federal Bureau of Investigation’s Coastal Georgia Violent Gang Task Force met with several agencies last Thursday and Friday to recognize members of certain agencies for their participation and assistance in one of the largest and most successful gang cases in the Southern District of Georgia and the United States in recent years.

Dubbed Operation Sandy Bottom, this case alone indicted 48 members of a drug trafficking organization that was based out of Coffee County, Douglas, Georgia.  The Oak Park Community, which is referred to as the “Sand Ridge” was ground zero for this drug trafficking organization that reached counties in the southern district, middle district and the northern district of Georgia.  Agents were able to dismantle this organization through a series of court ordered wire taps, physical and electronic surveillance and controlled purchases.  Ultimately, these tactics uncovered dirty prison guards, prisoners in leadership roles while in custody in other prisons, senior members of the organization, sources of supply in Mexico and even an assassination plot against co-conspirators.

This investigation began in November of 2018 in Coffee County when the drug unit responded to the complaints of high violence in the area, including a shooting that left one man dead and another wounded.  In June 2019, the Coffee County Sheriff’s Office case agent, FBI and ATF presented “Operation Sandy Bottom” to the Organized Crime Drug Enforcement Task Force (OCDETF) board in Savannah, Ga, the case was approved for OCDETF funding and officially adopted as an FBI case.  During the investigation, a rival gang shooting out occurred in the area leading to the arrest of co-conspirators involved in the drug and firearms trafficking, also leaving one of the shooters wounded and ultimately arrested.

In October 2019 the Coffee County K-9 unit were able to intercept two kilograms of methamphetamine that were sold for approximately $10,000 from a source of supply in a surrounding county to a distributor in Coffee County, two co-conspirators were arrested and charged with the total weight of the drugs.  In the following months, agents identified and intercepted shipments of drugs, contraband phones and tobacco all packaged to be smuggled into the Georgia State Prison system.

In May 2020 a federal grand jury indicts 48 members of this drug trafficking organization and preparation for a takedown begins to take place.  Amidst the Covid-19 pandemic, planning for the take down was delayed three times and several months in between.  Ultimately, On January 12, 2021 the case was unsealed and raids were conducted in several counties simultaneously with armored vehicles, several swat teams and other special units within the federal government.  Nearly 50 members of the organization were arrested, including three prison guards and federal drug conspiracy warrants were served to inmates who were already serving sentences.  Members were arrested in Coffee, Bacon, Emmanuel, Jeff Davis, Pierce, Atkinson and Wheeler counties along other parts of Georgia.  As court proceedings continue this week, nearly 90 percent of all the defendants have been convicted for their part in the conspiracy.

This case was seen as one of two most successful drug conspiracy cases in Nation, the Southern District of Georgia and the largest in Coffee County history.  During the case a total of four court ordered wiretaps were conducted and monitored and ultimately 25, 619 calls and text messages were monitored. The impact of this case was significant, so significant that Washington DC took notice and the director of the FBI Christopher Wray took notice and signed each of of these certificates to recognize the impact of Operation Sandy Bottom and its officers.

The agencies that were recognized with certificates are as follows:

The Georgia Department of Corrections/Intelligence Division

The Department of Community Supervision