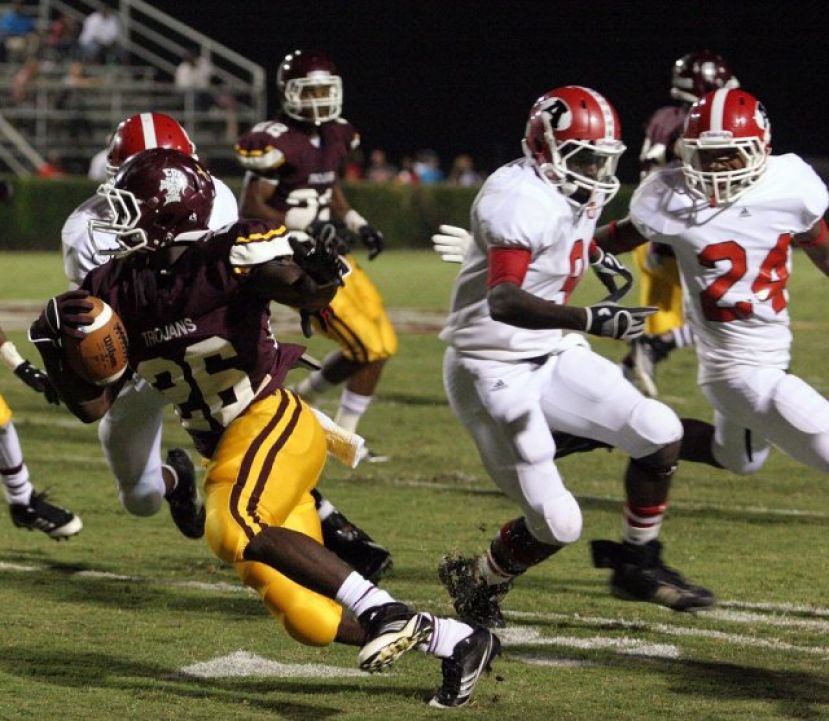 Special to Douglasnow.com Tyreek Hill (#26), seen here during his senior year with the Coffee Trojans, has been released from the Oklahoma State University football and track teams after being charged with domestic violence Thursday night in Stillwater, Oklahoma.

Former Coffee Trojan Tyreek Hill, a running back and kick returner for the Oklahoma State University Cowboys football team and a sprinter for the OSU track team, has been dismissed from both teams following his arrest for allegedly abusing his girlfriend Thursday night.

A story published on www.cbssports.com printed a portion of a statement released by the OSU athletic department. The statement read as follows: "Oklahoma State does not tolerate domestic abuse or violence. Based on the evidence and the serious allegations that have been made, Head Football Coach Mike Gundy has announced that Tyreek Hill has been dismissed from the OSU football team. He also has been dismissed from the track team. The allegations are under investigation by Stillwater Police, and by the OSU Office of Student Conduct. Those processes will proceed independently."

Thursday evening, Hill was arrested for allegedly hitting and choking his pregnant girlfriend in Stillwater. The victim was transported to a hospital for injuries sustained in the alleged incident. After playing football and running track at Coffee High, Hill, one of the nation’s fastest sprinters, attended two years of junior college before enrolling at Oklahoma State.

The 2014 season was his first at OSU and he finished the regular season with 1,811 total yards and three touchdowns (one each receiving, rushing, and returning punts). His biggest play came in the closing minutes of OSU’s game against in-state rival Oklahoma; Hill ran a punt back 92 yards for a touchdown to tie the game. The Cowboys would eventually win by three in overtime and become bowl eligible. OSU will play Washington in the Ticket City Bowl in Tempe, Arizona, on Jan. 2.

Earlier this week, Hill was named the Big 12’s Offensive Newcomer of the Year.