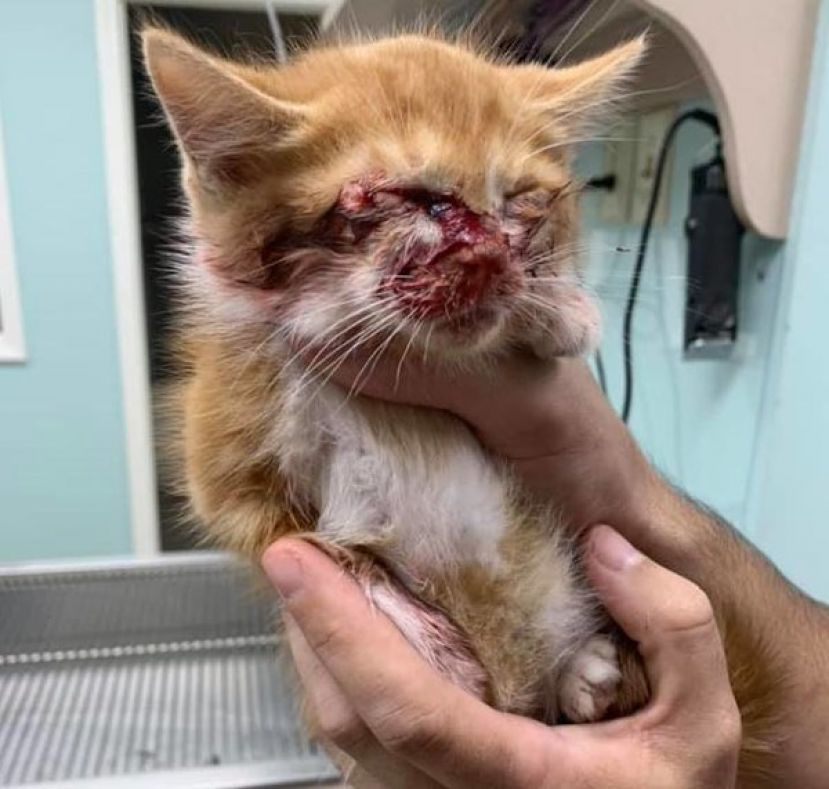 Photo courtesy Coffee Cause for Paws This five-week-old kitten, since dubbed Simba, is recovering after being shot in the face with a flare over the weekend. The alleged offender has been arrested.

The Douglas Police Department has arrested and charged Norris Keyon Moffett of Douglas with one count of aggravated cruelty to animals after he allegedly shot a kitten in the face with a flare gun. Moffett was booked into the Coffee County Jail following his arrest.

“Monsters aren’t real, but humans are.

“Today, we received a call for help. This beautiful five-week old kitten had been shot in the face with a flare gun. Why? Because evil doers exist in our community. Officers with Douglas Police Department were able to quickly identify the offender and he was arrested and charged with Aggravated Animal Cruelty.

“CCFP have named him Simba. He has faced evil and survived and will banish his enemies. He is our miniature Lion King!

“Simba is currently under veterinary care at Lindsey and Wills Animal Hospital. Simba will lose an eye, but he is expected to make a complete recovery. He will rise above and conquer!”

Monday, Aug. 19, CCFP posted an update on Simba. Here is the update:

“CCFP would like to express a very thankful message to all of our supporters! You ALL are the reason we are able to make a difference in so many innocent lives!

“Simba is so much better! He is a miracle! His eye socket is still swollen and Dr. Daniel Wills does not recommend surgery on such a young kitten. Anesthesia can be tough on a five-week old kitten. We will monitor the eye and provide eye drops as needed. Simba will be going to his wonderful foster today!

“The Douglas Police Department will be doing a press release on the offender.

“And always remember, saving one animal won’t change the world, but for that one animal, their world will change forever.”