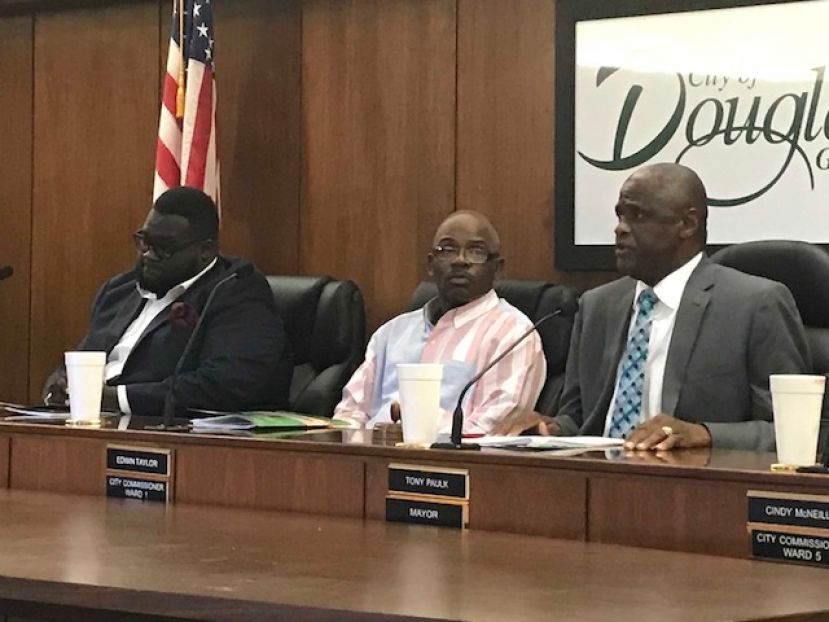 At a special called meeting of the Douglas City Commission Wednesday night, the commission reversed two decisions it made at its last regular meeting. First, the commission voted in a travel policy that defined a number of issues regarding commissioners’ official travel, including meal expenses; and second, commissioners voted to reverse a decision made to combine two city positions in the Community Development department. This proved to be a more controversial decision, at least for one commissioner, than the travel policy.

Commissioners handled the travel policy issue quickly. Five commissioners attended the meeting – Olivia Pearson was not present – and all approved the policy. The lengthy policy is too detailed to cover here. However, it did loosely establish a per diem of $65 broken down as follows: $12 for breakfast, $18 for lunch, $25 for dinner, and acceptable gratuity up to 18 percent (basically $10). The policy also disallows charging the city for meals for guests, such as spouses and children, who aren’t city employees.

The second item on the agenda didn’t go as smoothly. According to page 35 of the meeting information packet presented to media, the Community Development department has lost several employees due to retirement. Community Development “is one of the most critical departments due to the complexity of programs, federal/state requirements, consequences, etc.”

Currently, the city has an opening for the grants administrator position. Brandon Paulk is the city planner in Community Development. Commissioner Kentaiwon Durham wanted to combine the grants administrator and city planner position into one job that Brandon Paulk would fill. At the previous meeting, the commission voted to combine the jobs, which was not what city manager Charlie Davis recommended. The meeting information packet included the following statements: “The Director Georgia Henderson and City Manager Charlie Davis had been discussing this for the past few weeks. They were getting questioned about combining the two jobs so that an individual could get more money. The on Monday, 8/21/18, they were requested to meet with two commissioners. The conversation was centered on combining the jobs to give an individual more money.”

At Wednesday’s meeting, Commissioner Durham made a lengthy and passionate plea to combine the jobs. Mayor Tony Paulk stated that combining the jobs could violate the city’s charter, which had structured the department as it was. If the commission wanted to merge the positions, he said, then they needed to change the charter. This didn’t set well with Durham, who said he hadn’t heard that reason before. In the end, commission voted 3-2 to reverse the decision from the last meeting and keep the jobs separate. Commissioners Mike Gowen, Cindy McNeill, and Bob Moore voted in favor while Commissioners Durham and Edwin Taylor voted against.