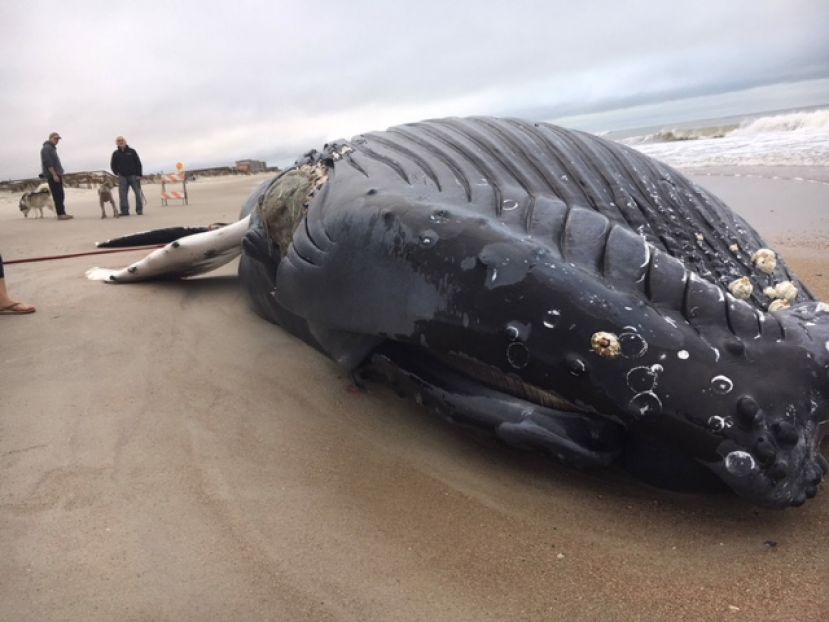 Photo courtesy of Shannon McCrea Smith Scientists are trying to figure out what killed the juvenile humpback whale that washed ashore at Fernandina Beach, Fla., over the weekend. Once they are done taking tissue samples for a necropsy, they will bury the whale on the beach.

Researchers in North Florida are trying to figure out why a dead juvenile humpback whale washed up on Fernandina Beach Sunday. The whale, which is an estimated 35 feet long and 6,000 pounds, washed up on the south end of Amelia Island, Fla., about halfway between Peters Point and Amelia South condominiums – an area very familiar to Coffee County residents and one in which several locals own property.

Monday, researchers, volunteers, officers, and interested citizens gathered around the carcass to take tissue samples and just see what was going on. Scientists swarmed the dead whale and will perform a necropsy in order to determine a cause of death. The carcass had bite marks where sharks had fed on it but most likely, that happened after the whale died.

Once researchers are finished with their work, crews with heavy equipment will dig a deep hole on the beach and bury the whale there. This may not be the first humpback to wash ashore in Fernandina Beach but it’s the first one in a long, long time, and it’s attracted visitors ever since it was found.