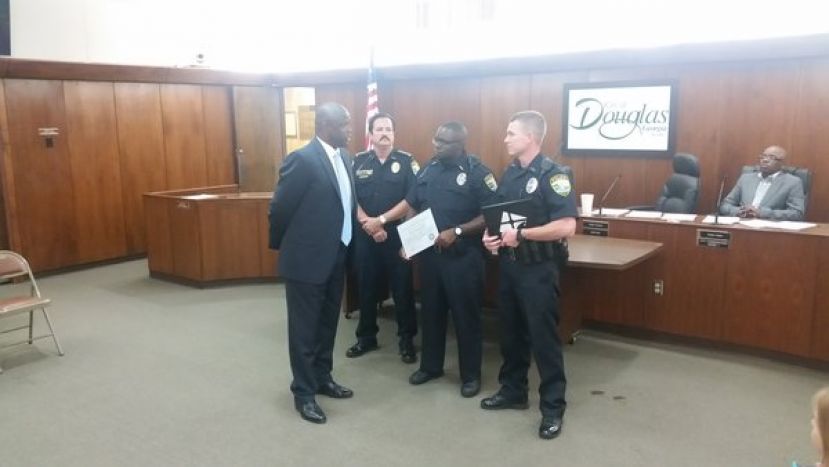 Only four members of the Douglas City Commission were at Monday's regular meeting – Mayor Tony Paulk, Mayor Pro Tem Bob Moore, Edwin Taylor (Ward 1), and Commissioner Pearson (Ward 3). Mike Gowen (Ward 4), Cindy McNeill (Ward 5), and Kentaiwon Durham (Ward 2) were each absent due to individual family concerns. The four who were present made a quorum and the meeting proceeded as scheduled.

In the pre-meeting work session the board heard from Building Inspector Randall Parker. Mr. Parker sought approval on behalf of Coffee Regional Medical Center to host the 5K run and 1.5 mile walk. The proposed 5K route is bounded by Bowens Mill Road on the west; Gordon Street, Chester Avenue, and Andrew Street on the north; North Daughtry Avenue on the east; and Ward Street and Ocilla Road on the south. The 1.5 mile walk covers the western portion of the 5K route. Mr. Parker was granted approval by the board. The event takes place on October 7, 2017.

Community Development Director Dale Batten proposed that the board appoint Ms. Kimberly Cook to the chair on the Coffee County Airport Commission vacated by Robert Moore. It was noted that the terms of Andy Purvis and Robert Porter were also expiring. Commissioner Pearson suggested that seeing as there were enough applicants, the board should replace Mr. Purvis and Mr. Porter. The board agreed and appointed Kevin Murphy and Jason Fuller to those positions.

The pre-meeting work session also saw Mayor Paulk open a discussion regarding a golf cart/motorized vehicle ordinance. The board agreed to be prepared to take action during the first meeting in October. Mayor Paulk went on to propose that the board instruct the city manager, police chief, and police commander to conduct a study and provide a report by December 1, 2017. The purpose of the study is to aid in increasing police visibility in the city.

Mayor Paulk also introduced a proposal that the board discuss a policy whereby the city provide the last 12 active months of utility expense reports to prospective renters, and inspect the rental properties to make sure they are energy efficient. Mayor Paulk said that the discussion was prompted by the fact that the overwhelming majority of electric service suspensions involve rental properties. It was generally agreed by all that this was a good idea, but City Attorney Jerome Adams noted that any inspection would require the permission of the property owner, not just the renter.

Also in the pre-meeting work session Mayor Paulk introduced discussion of a way to provide financial relief to citizens violating city offenses. Mayor Paulk specifically mentioned the problems in Ferguson, Missouri. He said that when people - who are usually citizens of Douglas - are arrested, the arresting officer must be taken off patrol to book the violator, the city must pay to house the arrestee in county jail, and the violator may be put on probation without the means to pay. Mayor Paulk put special emphasis on the injustice inherent in the fact that someone who is poor will have to sit in jail, simply because they cannot pay a bondsman. Mayor Paulk recommended that city court complete the Georgia Municipal Authority's Self-Assessment by December 1, 2017 and present the assessment by June 1 of each year.

Next the mayor introduced discussion of changing the person responsible for approval of travel expenses for elected officials. The mayor referred to an unnamed citizen who was seeking information regarding expenditures that the commission had made on their recent trip to Amelia Island, Florida. Commissioner Pearson had many questions about this subject. She preferred that the power to sign off on travel expenses not be placed in the hands of any one individual, but be shared by a committee.

More in this category: « DPD releases statement about incident that happened in women's restroom in Wal-Mart Local residents can apply for FEMA assistance in aftermath of Hurricane Irma »
Login to post comments