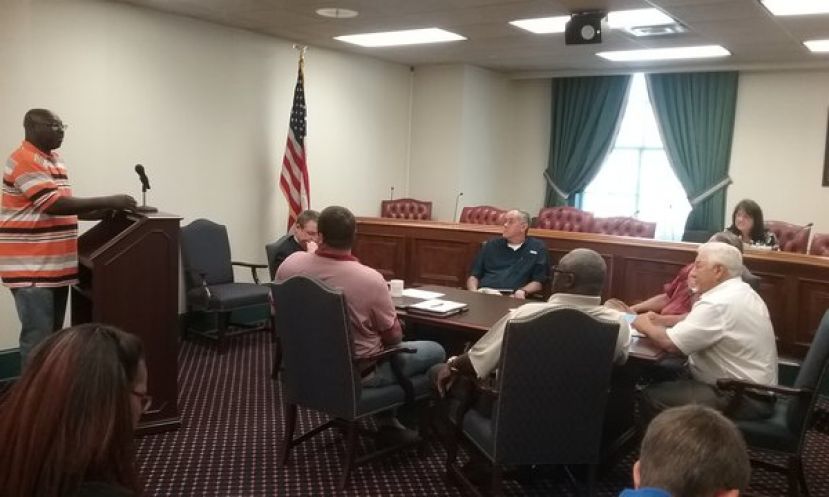 At the September 18, 2017 pre-meeting work session of the Coffee County Board of Commissioners the board heard reports from local officials regarding Hurricane Irma. The first report was from Coffee Count Fire and Rescue Chief Steve Carver. Chief Carver opened with praise for the outstanding support from the community. He went on to say that he felt Coffee County was blessed in the outcome of the crisis. He personally felt that God had surely had a hand in the fact that throughout the county there were no fatalities or injuries.

Chief Carver was first to laud the efforts of those at the big Red Cross shelter, claiming that the Coffee County shelter housed more than any other single facility in the state. Chief Carver is working with County Administrator Wesley Vickers to ensure that the county receives Federal Emergency Management Association funds for debris removal. Mr. Vickers spoke with DouglasNow. He said that local officials will be meeting with representatives from FEMA on Sept. 20 at 10 a.m. at the conference room at the Coffee County Road Department on Hwy 221 North.

During the hurricane there were four E911 employees in the office on standby at all times. The standby employees slept on air mattresses and relieved those six who were actively taking calls. There were 150 National Guardsmen working in the county beginning Sunday night and they helped with transportation and tree removal. Danny’s Pizza, the Salvation Army, Bobby’s Treat Shop, and Reedy Branch Baptist Church along with private individuals all donated food to the call center. In summation Ms. Crockett said that E911 “had a good team and everything went well.”

Sheriff Doyle Wooten briefly addressed the board and informed the members that everything went as well as could be expected considering the circumstances. Sheriff Wooten said that there was no problem calling in extra deputies. He then admitted to County Administrator Wesley Vickers that he had given 47.7 gallons of gasoline to the Georgia State Patrol. His specificity was admired by all present.

Larry Nesmith addressed the board in his capacity as Red Cross volunteer. He stated that the number of evacuees housed in the shelter at Central Square Gym was 797. He remarked on the absence of incidents at the shelter and singled out the Coffee County Jail inmates who helped, saying, “I wish they would work that hard when they get out.”

Next came County Road Department Assistant Superintendent Wendell Troupe. He reported that even with 217 trees having fallen on roadways, all county roads were now open. He lauded his fellow employees for “burning the midnight oil” during the crisis.