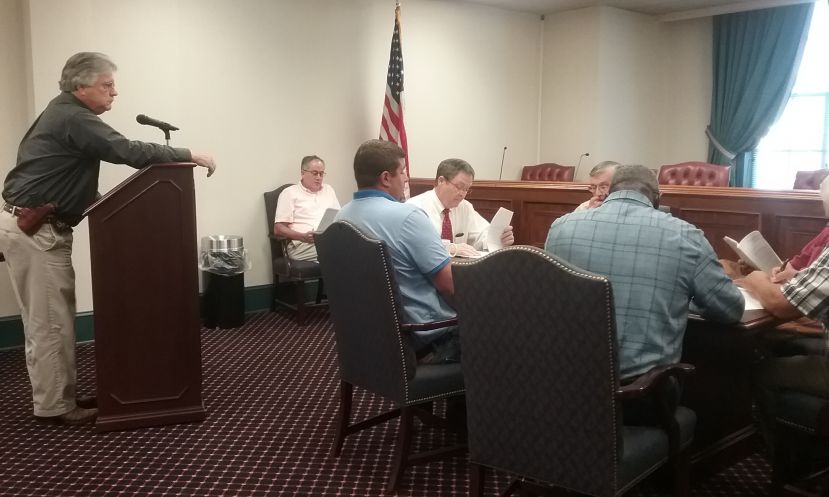 At the regular August 21 meeting of the Coffee County Board of Commissioners Robert Hurst of Hurst and Hurst CPA made a presentation and reported that the county received a “clean opinion” regarding its recent audit. The clean opinion means that Coffee County was found to have followed all accounting rules appropriately and the reports made are an accurate representation of its financial condition.

At the pre-meeting work session, the board reviewed an order to change the contract for construction on Dewberry Road. East Coast Asphalt is in charge of the Dewberry Road project. They have discovered unsuitable substrate beneath the resurfacing. At the regular meeting the board approved an upward adjustment of $3,600 on the contract.

Pastor Willie Williams, Jr. gave the invocation at the regular meeting and announced the Monday, August 28 prayer vigil. The prayer meeting, asking for forgiveness and guidance for our community, will convene at 8:00 pm on the Coffee County courthouse steps. The inaugural 2015 event attracted approximately 1500 attendees. The 2016 prayer vigil was hampered by adverse weather and was only attended by an estimated 700 people.

The board also reviewed proposed TSPLOST projects. These widening and resurfacing plans for county roads total $32 million in contracts. The board approved the list of projects and forwarded that list to the Southern Regional Commission. If approved there, the list of projects will be voted on in a referendum by Coffee County voters in May of 2018.

At the pre-meeting work session Sheriff Doyle Wooten also addressed the board and requested that they purchase new vehicles for the sheriff’s department. The board approved the purchase of nine 2018 Dodge Chargers from Akins Dodge Jeep Chrysler in Winder, Georgia. The total cost of the Dodge Chargers is $198,900. They also approved the purchase of two Ford F150s for a total of $55,872.32. The trucks will be purchased from Prince Ford of Douglas. The county will also purchase one 2018 Dodge Durango at a cost of $28,233. The total cost of vehicles purchased for the sheriff’s department was $282,995.32.

More in this category: « Demolition of downtown building has been reschueled, September 16-17 Board of Elections announces candidates for the cities of Ambrose, Nicholls elections »
Login to post comments