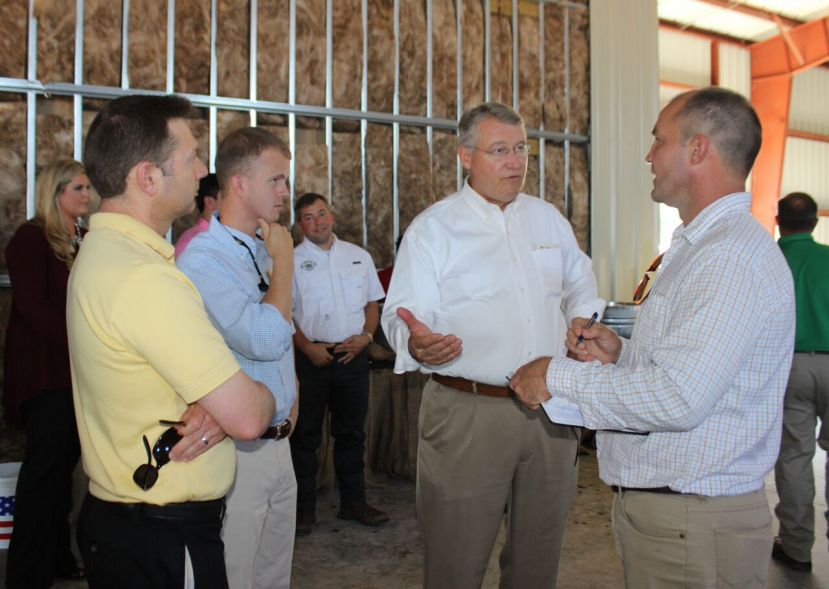 U.S. Rep. Rick Allen was in Douglas August 15 and 16. His stop was part of a district work period, a time in which members of the U.S. Congress can connect with their constituents. Congressman Allen is visiting all 19 counties in his district. He had lunch in Macon on the 15th, then came to Douglas and that evening visited the office of local orthopedist James W. Barber, MD. His stop at Dr. Barber’s office was announced at the regular August 14 meeting of the Douglas Mayor and City Commission. Congressman Allen arrived at Premium Peanut on the morning of August 16 and toured the entire facility before speaking at the plant’s still-under-construction oil mill.

The congressman spoke at length with DouglasNow prior to making his address. Rep. Allen was very enthusiastic in his support of President Trump. He said that the president has been hard at work removing regulatory burdens from business, and that there were already six and a half million jobs in this country that needed filling. Congressman Allen went on to say that he and the president both had run for office on getting folks to work. He claims those jobs are on the way.

DouglasNow asked Congressman Allen what he thought about the recent events in Charlottesville, Virginia. Allen said that there had been a lot of “noise” on the subject. He went on to say that the trouble began when the Charlottesville City Council failed to understand the implications of removing the statue. He then took a rhetorical step back. “You know, we all fall short of the glory of God. We all make mistakes, but I feel the deterioration of morals in this country leads to extremism."

Representative Allen also spoke about immigration. He said he agrees with the president; that is, that the people coming into our country need to share our values, the foremost of which are a love of tranquility and peace, along with accountability. Representative Allen said that society’s boundaries can be negotiated, alluding to the recent breach of the peace in Charlottesville and the failure of the parties to negotiate.

Mr. Allen went on to lament the fact that the spotlight has been shown so on people who are “disturbed." He then introduced DouglasNow to Alex Hill, his field representative, who he said is an example of a young person dedicated to serving his country. Rep. Allen said that there are many like Mr. Hill among the youth of this country and we would do well not to lose sight of that fact.

Representative Allen returned to the topic of President Trump and again praised his party’s leader for lifting regulations. Of the President on this subject, Mr. Allen said, “He works on this stuff in his sleep." He spoke on recent changes that require the oil refinery permitting process to be completed within two years, instead of a decade. And he said Secretary of Agriculture Sonny Perdue was concerned with the problem of foreign commodities, specifically the fact that the Chinese government is paying their own farmers $1.40 per pound of cotton, while paying only sixty cents per pound to U.S. cotton farmers, and that for cotton of superior quality.

Rep. Allen then switched gears again in order to sing the praises of U.N. Ambassador Nikki Haley. He said that Ambassador Haley had just gotten China and Russia to agree to the toughest sanctions against North Korea in history. Representative Allen finished by noting the need for something to be done in healthcare, saying that 75 counties in Georgia had lost Blue Cross Blue Shield coverage.

DouglasNow also spoke with Premium Peanut Production Manager W.A. Carver. Mr. Carver has been with the company for two years and he says that the company is now hiring. “Whatever position you begin at, even if you’re just pushing a broom, we start you out at $10.25 an hour. And we promote from within. All of our team leaders and supervisors have started out here at entry level”.