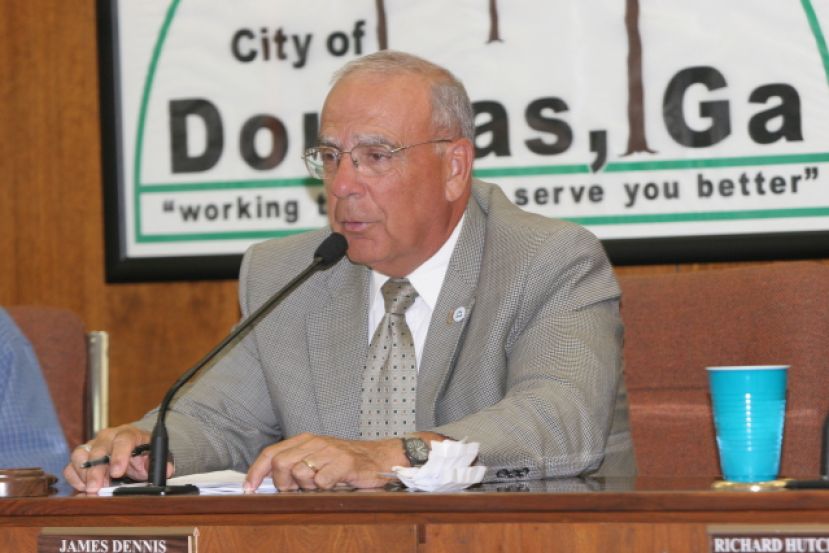 Robert Preston Jr./Douglasnow.com Douglas Mayor James Dennis addresses the audience and commission at Monday night's regular commission meeting. During his remarks, he reported that two accused burglars had been arrested as a part of the See Something, Say Something initiative.

The Douglas Police Department is about to get six new police cars – five patrol vehicles and one car for the Narcotics Drug Task Force. The Douglas City Commission voted to purchase the cars at Monday night’s regular commission meeting. All 2014 Dodge Chargers, the patrol vehicles will cost a total of $117,501.85 while the task force car will cost $23,611.25. The commission also approved the purchase of additional equipment for the patrol cars that comes in at just over $57,000. The cars will all come from Akins Ford.

In other business, the commission approved the following: the sidewalk café ordinance, which allows patrons at downtown cafes to eat outside on the sidewalk; a three-year extension to Tom Reilly’s airport hangar lease; the use of Central Square for the annual Kayla Day event; and amendments to the FY 2014 and FY 2015 budgets due to changes in revenue and expenditures since both were adopted.

At the end of the meeting, Mayor James Dennis reported that as a result of the See Something, Say Something initiative in the city, two individuals who authorities believe are responsible for a number of burglaries in the city have been arrested.