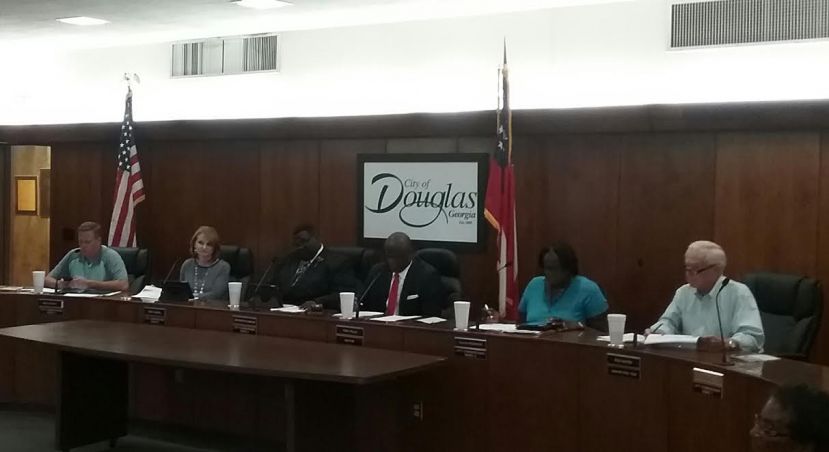 The June, 12 2017 work session of the City of Douglas Mayor and Commission was a busy one. The board discussed and agreed to approve the purchase of equipment for the fire department totalling $234,410 in value.

There was also a discussion of the city’s new pandering, prostitution, and pimping ordinance. The need for this new ordinance was elucidated by City Manager Terrell Jacobs and City Attorney Jerome Adams. Ward 3 Commissioner Olivia Pearson asked why this statute was necessary and Mr. Jacobs replied that the reason was revenue. Mr. Adams went on to say that the police department had been bringing cases of this nature to court, but because they relied on a state law and not a local ordinance the cases went directly to State Court. The city could see no revenue from fines paid in State Court.

The board next took up the matter of the city’s curfew ordinance. Douglas has for some time had an ordinance on the books making it illegal for minors under the age of 18 to be out of doors between the hours of midnight and 6 am unaccompanied by a parent or guardian. Mayor Paulk and all of the board members, particularly Commissioners Pearson and Gowen, expressed hesitancy at the idea of young people being arrested simply for being outside.

Ward 4 Commissioner Mike Gowen pointed out the fact that if a person was aged 16 years or younger then they would not be arrested but taken into custody. From there the juvenile authorities would have be involved. Mayor Paulk said that the ordinance should essentially be enforced as it was written. The ordinance calls for the police officers, “to admonish such minor to go to his home; and should the minor fail and neglect to comply with the terms of that section, the police officer shall arrest the offending minor, and after arresting, as aforesaid, immediately notify the parents or guardian of such person, that unless such parent or guardian shall come and take such person off the streets as aforesaid, the arresting officer shall then detain the minor until directions shall have been given by the city manager as to custody.”

During the work session there was also discussion of the need for appointees to the Satilla Regional Library Board. On June 30 there will be three vacancies on the board. Those with questions about requirements for service on the board may contact City Clerk Wynetta Bolder at This email address is being protected from spambots. You need JavaScript enabled to view it..