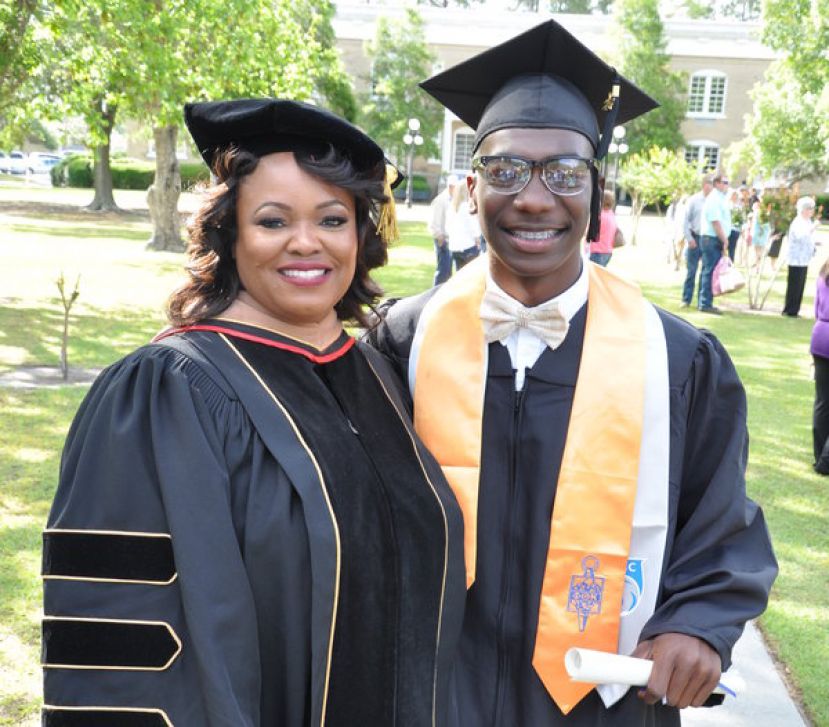 South Georgia State College added approximately 325 new alumni to its numbers during the summer and fall 2016 and spring 2017 terms. These newly-minted alumni were celebrated at the 88th annual Commencement ceremonies held on both the Douglas Campus and the Waycross Campus, where they were charged to uphold the principles and academics standards they learned at SGSC.

At the Douglas Campus ceremony, SGSC interim president Dr. Ingrid Thompson-Sellers highlighted the accomplishments of SGSC’s academics by recognizing just a few of the numerous individual academic achievements of the recent Honors Night including Tiffany Morgan, honoree at the University System of Georgia Academic Recognition Day. Move On When Ready students, Marisol Rivas, D’Carius Clark, and Emma Page, were congratulated on obtaining an associate’s degree from SGSC two weeks before graduating with their senior class at Coffee High.

She also recognized Coach CM Jenkins and the SGSC women’s and men’s swim teams. The women’s team earned national runner-up honors at the NJCAA swimming and diving championship for the second year in a row, while the men’s team captured third.

Dr. Tracy McClelland, alumna of the former South Georgia College (SGC), spoke to the graduates in Douglas. Dr. McClelland continued her education after SGC at Valdosta State earning her Masters of Science in Nursing. She completed her Doctorate of Business Administration, majoring in Health Care Management and Leadership, at California Intercontinental University. She currently owns Ycarte’ Health Career Center that she founded in 2006 to help develop nursing curriculum for training and is responsible for coordinating nursing workshops. Dr. McClelland shared her story of the obstacles and challenges she faced on the road to her current profession and success. She summarized her message to the graduates by saying, “Follow your heart. Create peace. Fall in love. Show gratitude. Enjoy the little things. Dream big. Believe in miracles. Discover your passion. Be spontaneous. Embrace every possibility. Believe in yourself. Your life is now!”

At the Waycross Campus ceremony, Dr. Thompson-Sellers recognized the accomplishment of Joseph King, a home-schooled student receiving his associate’s degree and high school diploma simultaneously. She also congratulated the men’s basketball team, led by head coach Cory Baldwin, who made it to the semi-finals in the GCAA tournament this season. The Hawks have won an impressive total of seventy-four games over the last three season and sixty-two players have gone on to the next level to play and pursue additional college education. Zaquavian Smith was recognized for being named as a second team NJCAA All-American and for leading the GCAA in scoring this season, averaging 19.6 points per game. He earned additional honors this season, including first team All-GCAA, GCAA Player of the Year runner-up, and four-time GCAA Player of the Week. Smith has signed a letter of intent to continue his basketball career at Nicholls State, a Division I member of the NCAA based in Thibodaux, Louisiana.

The Waycross keynote speaker was Dr. Joshua Wade McCarthy, a primary care physician affiliated with Georgia Physicians South in Waycross. Dr. McCarthy is also a member of the Georgia Army National Guard where he has served as a flight surgeon since 2013. He graduated from the former Waycross College in 2005 and went on to obtain his bachelor’s degree from Valdosta State, followed by his Doctorate in Medicine from the Medical College of Georgia in 2012. Dr. McCarthy challenged the Waycross Campus graduates to exhibit loyalty and wisdom to their family, friends, and in their work as they move forward with their lives. McCarthy encouraged the graduates to learn from those who came before them and then to share what they learned with others. “Wisdom and loyalty will be two characteristics by which you will be known,” said McCarthy.

All of the graduating class of South Georgia State College have worked hard to earn this achievement, and their dedication and determination have made it possible.

More in this category: « School board appoints Leola Johnson to vacant District 1 seat Facebook threats land one in jail »
Login to post comments