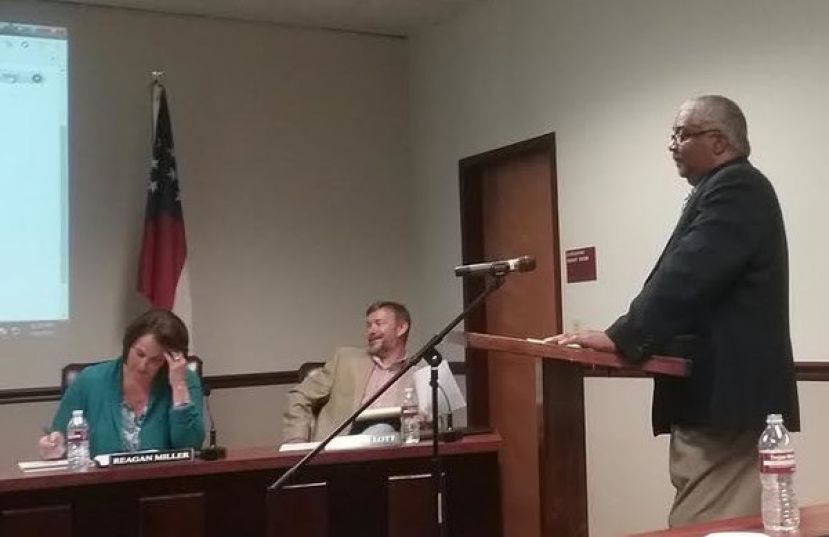 Bradley Bennett/DouglasNow.com Johnny Wilkerson speaks to the board of education during the interview process to fill the late Ronnie Johnson's unexpired term.

At meetings held on May 9 and May 11, the Coffee County Board of Education interviewed candidates hoping to fulfill the unexpired term of late District 1 board member Ronnie Johnson. Johnson died in March due to diabetes and complications from surgery. The May 9 board meeting was called to order by Chairman Jesse Jowers. School Superintendent Dr. Morris Leis asked the candidates to wait outside of the boardroom while they interviewed each one of them in turn. Because it was an open meeting the candidates for the position could not be required to be absent. But all agreed to do so without complaint. This allowed the board members to ask very similar questions of all the candidates, yet still obtain from each one a fresh, unrehearsed answer.

First up was James W. Anthony, Jr. Mr. Anthony formerly served as a member of the board of education. Each candidate gave a brief statement before answering questions and Mr. Anthony stated that he was applying for the seat because people from the community had sought him out and suggested that he do so.

Next came Leola Johnson. Ms. Johnson is a lifelong Coffee County resident. She retired from Coffee Middle School in 2005. Vice Chairman Preston asked, “If you came to my door campaigning for this post, and I asked why you were running, what would you tell me?” Ms. Johnson replied with an expression of her belief in athletics as well as academics, along with her continued involvement in the Coffee County school system through her grandchildren.

The third candidate to be interviewed was Tonya Paulk Wilkerson. Ms. Wilkerson is a wife and mother, and Coffee High graduate. A two-sport high school athlete and a community basketball coach, Ms. Wilkerson is very proud of the memory of her grandmother, Clara Allen.

Next was Patricia Ates. Ms. Ates spent 32 years teaching in Coffee County and is now retired. She spent her childhood in District 1 and stated that she intends to utilize her wealth of experience in helping the board make the decisions which will best serve the children of Coffee County. Ms. Ates said that her personal and professional motto is “All children can learn.”

Fifth up was Johnny Wilkerson. Mr. Wilkerson graduated from Coffee High in 1974 and spent much of his professional life as a welder. Owner of a local video production company, Mr. Wilkerson has been very visible throughout the community, including the school system, for many years. He has been a substitute teacher for 10 years and greatly enjoys classroom discussions. He is also active in the local Boys and Girls Club and was a high school classmate of the late board member Mr. Ronnie Johnson.

The final interviewee at the board meeting of May 9 was Paulette Brown. Ms. Brown is the spouse of Richard Brown, the assistant basketball coach at Coffee Middle School. Ms. Brown is a candidate for an MBA from Kennesaw State University. If appointed she intends to make the schools better by facilitating more parent involvement.

After interviewing Ms. Brown the board adjourned, but continued with the interviews at the May 11 work session. The first candidate to be heard during this session was Dr. J.L. Veal. Dr. Veal has been in the Coffee County system since 1961. He spent 32 years in the same classroom. Chairman Jowers asked, “What strengths do you have that you feel would strengthen the board?” Dr. Veal cited his consistency and said that he would, “...join the board and make efforts to be consistent in helping the boys and girls of this system.”

The final candidate for late board member Ronnie Johnson’s unexpired term was Ms. Irene Murray. Ms. Murray retired in 2006 from 32 years as an educator. Ms. Murry is the widow of J.D. Murray, who sat on the board of education for many years. It was J.D. Murray who Johnson succeeded on the board. She said, “I have great concern, not for the books, but for the people.” Ms. Murray went on to say, “I’m here for the student. I’m here for the community. I’m here to make things better.”

When Ms. Murray finished Dr. Leis announced the end of the interview process. He did not state when the candidate selection process would be completed.