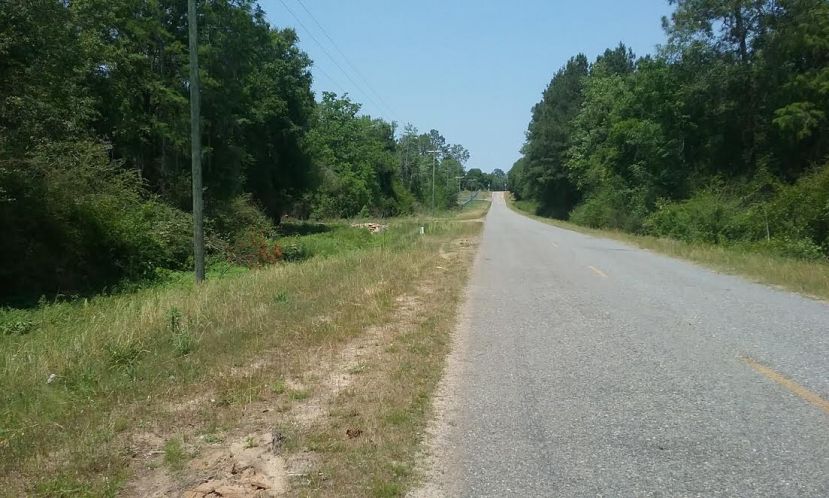 Bradley Bennett/DouglasNow.com A recent wastewater spill occurred near this stretch of Wendell Sears Road, located in eastern Coffee County. The spill dumped water into an unnamed tributary of the Seventeen Mile River.

The Douglas Wastewater Collections System reported that a major wastewater spill occurred at 9 pm on April 6, 2017. The spillage continued until 10:30 pm on April 7. A sign posted on Wendell Sears Road announced that a sanitary sewer overflow occurred from a manhole located inside the Southeast Water Pollution Control Plant at 622 Iron Road. The sign, a piece of 8 ½ by 11 inch computer-printer paper, read “Approximately 7,000 gallons were reported.”

The spill took place in an unnamed tributary of the Seventeen Mile River. The sign also recommended that no one have contact with the water until after April 13. It further announced that the waterway would be sampled upstream and downstream “to ensure that the water quality has not been adversely affected. Sampling will be conducted for dissolved oxygen concentration, fecal coliform bacteria, pH, and temperature. The cause of the spill was localized flooding from heavy rains…”

The sign was read and photographed by a resident who happened to be traveling down Wendell Sears Road and saw someone from wastewater collections posting the sign. The sign specified Kevin Davis, Project Manager, as the person to whom questions may be directed. It provided no phone number or email address.

Douglasnow.com contacted ESG and spoke with Mr. Davis, who works for ESG Operations, Inc. They handle city and county wastewater under contract. Mr. Davis stated that when a wastewater spill occurs his company is required to contact the State Environmental Protection Division and that they must publish a notice in the legal section of the local newspaper of record. A notice regarding the April 6 spill was submitted to the Douglas Enterprise on April 7 and should have run in their next edition. ESG must also contact the Coffee County Health Department. Follow-up sampling is required for a year after a spill of this nature. In addition to dissolved oxygen concentration, fecal coliform bacteria, pH, and temperature, Mr. Davis and his organization are required to check for algae blooms and fish kills.

Mr. Davis said that the spill in question occurred due to heavy rain. The spill that occurred on April 6 - 7 is referred to as “a manhole surcharge.” Mr. Davis claims that the manhole in question has now been raised. He also said that the city has committed to upgrading the Iron Road station and this commitment will help keep a spill like this from occurring in the future.

The current SPLOST has funds that are earmarked for water and sewer upgrades. These funds are going toward station upgrades, but also to decreasing ‘points of inflow’ where storm waters are able to flow into the sewer system. There was another previous incident on March 1, 2017. That spill was 3,400 gallons. In that instance, a sewer lateral - a pipe that goes to individual homes - was blocked. The sewage overflowed into a storm drain. This was also reported to the EPD, the County Health Department, and announced in the newspaper.