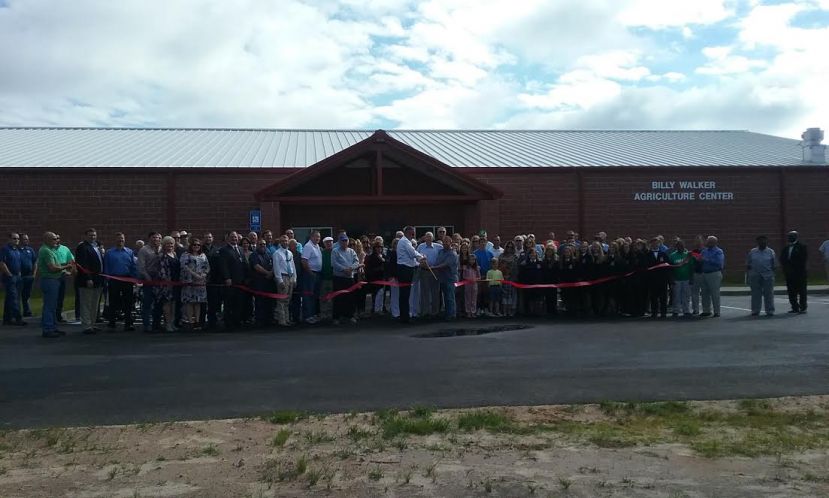 Bradley Bennett/DouglasNow.com School system personnel and members of the community attended the ribbon cutting for the Billy Walker Agriculture Center this week at Coffee Middle School.

On April 24, 2017 Coffee County school system unveiled the new Billy Walker Agricultural Center to the public at the Coffee Middle School. Agricultural educator Billy Walker, a retired Coffee High School educator, was in attendance along with his wife, Joanne. The center will house nearly 50 animals when fully operational.

Coffee Middle School Principal Sherri Berry spoke to those assembled and was introduced by Career, Technical, and Agricultural Education Director Brad Riner. Principal Berry spoke about how the community was “blessed.” She opened her remarks with discussion of a car crash involving ag teacher Jamey Stodghill. Two weekends ago Mr. Stodghill was returning from an out-of-state trip to purchase livestock for the new agricultural center when he was hit by an alleged drunk driver. Rescue personnel had to remove Mr. Stodghill from the wreckage with the jaws of life and he was airlifted to Macon. Mr. Stodghill and his wife Heather were in attendance. Jamey is still recovering, but he was able to walk around without any assistance after the ceremony.

Superintendent Dr. Morris Leis spoke next. He took the opportunity to thank the school board and city government as well as everyone in the school district office for helping to make the Billy Walker Agricultural Center possible.

Next at the podium was State Representative Dominic LaRiccia followed by State Senator Tyler Harper. Both thanked the community at large for allowing them to serve. Mr. Harper addressed the FFA members in attendance. He said, “I got my start in a blue and gold jacket. … I learned many lessons in FFA.”

Just prior to the ribbon cutting Pastor Gregory Pope of Covenant Church spoke to the crowd. Pastor Pope is a former student of Billy Walker’s. After telling humorous anecdotes from his high school days, Pastor Pope ended on an emotional note. He addressed Mr. Walker directly, saying, “I want to thank you for being the man you are, the leader you are. And I want to thank Joanne, Jamie, Greg, and Annette for letting us all be the Billy Walker family.”