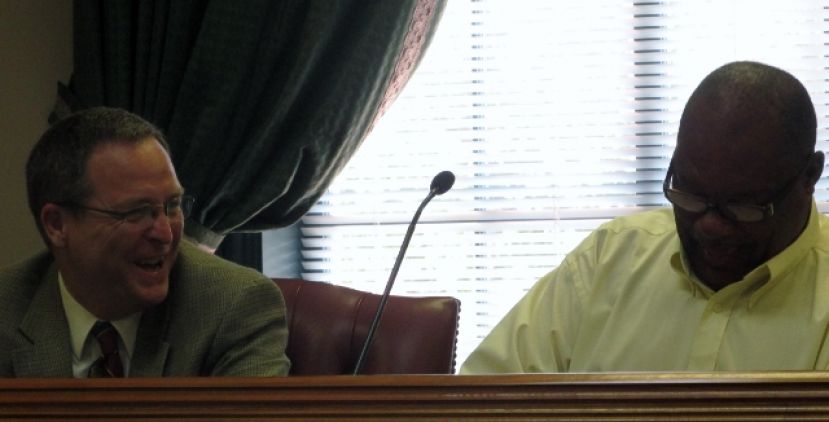 Jerry A. Hudson/DouglasNow.com County attorney Tony Rowell (l) and Chairman Frank Jackson share a laugh Monday during the regular meeting of the Coffee County Board of Commissioners.

Road resurfacing and paving topped the agenda Monday during the regular meeting of the Coffee County Commission, with a number of projects being expedited and others being placed temporarily on the back burner.

County Administrator Wesley Vickers went before the commission, requesting an amendment to the SPLOST V priority list of roads slated for resurfacing and/or paving. Vickers stated since the original consideration for priority projects was established, other findings have necessitated the alteration.

Vickers specifically mentioned Mark Mobley Road in West Green, which, upon completion, will account for nearly five miles of resurfacing.

"That one is just in pretty awful shape right now and we've constantly had to fix potholes and do patch work," Vickers said. "The condition of the road is one of the worst we have on our priority list, and I'd like for the commission to move ahead and place it at the top."

Mark Mobley Road was originally slated for resurfacing in 2015 under the original SPLOST V list, but now will be seeing construction some time in 2014 due to the commission's decision Monday.

In other business Monday, the commission:

* Approved the purchase of four Dodge Charger patrol cars for the sheriff's office at a cost of $92,544 from Don Jackson Chrysler in Union City

The Coffee County Commission meets the first and third Monday of each month at the courthouse, with a work session at 8:30 a.m. and a regular meeting at 9:30 a.m.