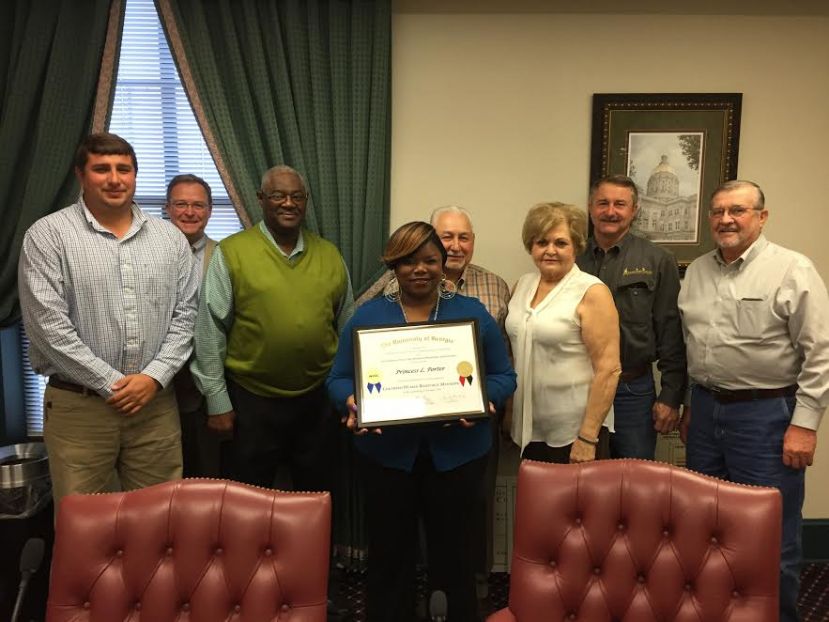 Robert Preston, Jr./DouglasNow.com Princess Porter shows her certification from the University of Georgia at Monday's county commission meeting. She is now a certified human resources manager and was recognized as such by the county commission.

For the first time, Coffee County has a certified human resource manager. At Monday’s county commission meeting, commissioners recognized Princess Porter, the county’s human resource director, for earning her certification from the University of Georgia.

County administrator Wesley Vickers praised Porter for her work. “She has been working on this for two years. Princess has a sweet spirit and she works very well with others. I encourage her to continue with her training,” he said. Commissioner Jimmy Kitchens agreed, stating, “We thank you for everything you do. You do a great job for us.”

Commissioners also approved a request from Johnnie Batten Jr. to rezone 2.58 acres at 264 206 Connector NW from R-2 to Commercial. The county conducted a public hearing prior to taking the vote. No one showed up to offer any comments during the hearing. Commissioners unanimously approved the request.

Also on the agenda were two changes to the personnel policy. One dealt with political activities, specifically prohibiting candidates who have been elected to a county office from holding a job (part-time or full-time) in another county department. The other item raised the amount of sick leave employees can accrue. Both were approved unanimously.

The county plans to repave portions of 11 roads in the county and in Broxton, Nicholls, and Ambrose in 2017. East Coast Asphalt submitted the lone bid for the projects for $942,862.75. “This is under the target budget we had for this project,” stated county administrator Wesley Vickers.

Commissioners covered two more items, both of which they approved unanimously: The 2017 indigent defense agreement with the Waycross Judicial Circuit (it went up a bit due to an increase in Coffee County’s caseload in 2016) and the county administrator’s contact. Vickers received a three-year contract with a five percent salary adjustment. This would be Vickers’s first raise since being named county administrator over four years ago.