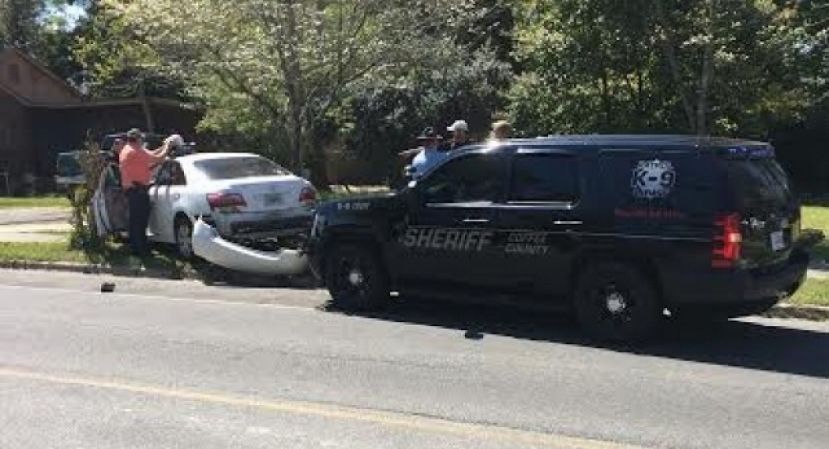 Robert Preston, Jr./DouglasNow.com This is the scene of a chase-ending crash that happened at the corner of South Daughtry and West Ward Street just before 3 p.m. on Wednesday. The subject struck another vehicle a block up the road before crashing on the sidewalk a short distance away.

Just before 3 p.m. this afternoon, the north side of Douglas erupted in sirens. Two separate and unrelated incidents had officers from the Douglas Police Department, Coffee County Sheriff’s Office, Georgia State Patrol, and Douglas Fire Department flying in different directions.

Earlier in the afternoon, a deputy initiated a traffic stop on a Toyota sedan driven by Timothy Sanchez Blank, 26. According to officers, Blank refused to stop and led units on a chase through Douglas. Blank crashed into a car near the intersection of South Grady and West Ward Street. He continued east on Ward and attempted to turn onto South Daughtry when he crashed a second time, coming to rest on the sidewalk. He was arrested and charged with wreckless driving, fleeing/attempting to elude police, and possession of marijuana. In November of last year, Blank was arrested on similar charges. This is at least the 12th time he has been arrested.

At the same time, firefighters responded to a house fire on North Wynn Avenue. The fire was extinguished quickly and no injuries were reported. Believed to be an electrical fire, units had the fire out before it damaged any surrounding property.

Investigations into both incidents are still ongoing.